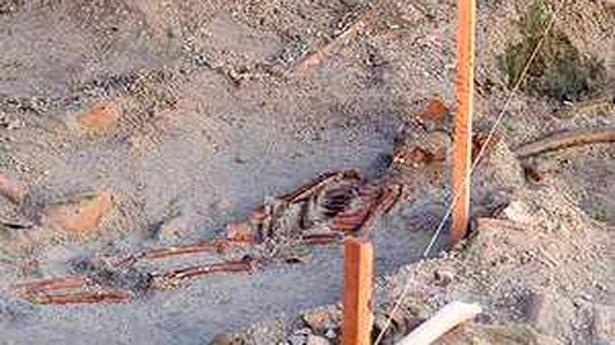 The nearly 350 skeletons found in a mass grave site in Mannar, in Sri Lanka’s Tamil-majority Northern Province, predate the period of the island’s civil war by a few centuries, a U.S.-based carbon dating analyst has said. Reports prepared by a testing laboratory in Miami, Florida — where Sri Lanka sent the samples in January — and presented to the Mannar magistrate’s court have indicated that the bones belonged to a time period between 1499 and 1720 A.D., according to local media. The reports were made public on Thursday.

Amidst thousands of complaints of enforced disappearances from the Northern Province, including from Mannar, during the years of the brutal civil war which ended in 2009, the accidental sighting of a mass grave, said to be Sri Lanka’s biggest, last year, sparked considerable anxiety and speculation among locals.

The Office on Missing Persons (OMP), set up by the Sri Lankan government in 2016 and tasked with handling the scores of cases of enforced disappearances, funded the transportation and testing of bone samples. Following the report, the OMP said it would await the orders of the Mannar magistrate on further action.

“Until further orders we will continue our excavation, we are on the 155th day now. We have so far identified 342 and numbered skeletons, including those of 29 children,” W.R.A.S. Rajapaksa, the consultant judicial medical officer at Mannar District General Hospital and chief investigator at the site told The Hindu.

A nursing home near Seattle is locked down after a resident and a worker were found to have the coronavirus, officials at the home said, and two other cases in the area were confirmed on Sunday. Officials with King County Public Health said the two latest cases involved men in their 60s with underlying medical […]

Turkey announced Wednesday its first coronavirus case, a man who had recently travelled to Europe and is in good health. Also read | COVID-19 cases surge in country “The test of a patient suspected of carrying the coronavirus returned positive,” Health Minister Fahrettin Koca said in a television broadcast. He added that the man was […]

All efforts are being made to bring the mortal remains of the 27-year-old woman from Kerala, killed in the in the Christchurch terror attacks, the Chief Minister’s Office (CMO) said here Sunday. Ancia Alibava from Kodungallur in Thrissur district, among the 49 people who were killed in the shootouts at two mosques, was pursuing her […]