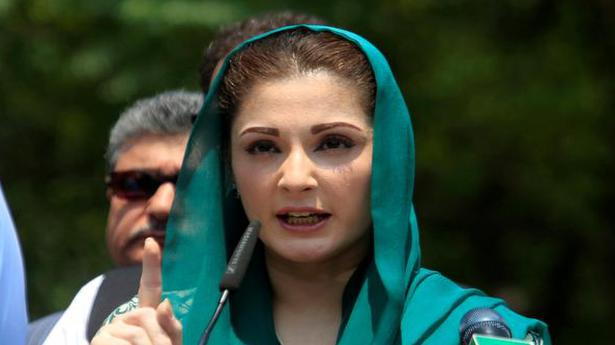 Maryam Nawaz, the daughter of jailed former Pakistan premier Nawaz Sharif, has been admitted to the same hospital where her father is undergoing treatment for low platelet count, according to media reports on Thursday.

The health condition of Mr. Sharif, 69, who was admitted to the Services Hospital in Lahore on Monday from the Kot Lakhpat jail, deteriorated with critically low platelet count, The Express Tribune reported.

He is serving a seven-year prison term in the Al-Azizia Steel Mills case since December 24, 2018 in the wake of the Supreme Court’s July 28, 2017 verdict in the high-profile Panama Papers case.

He received transfusions of mega units of platelets at the hospital on Tuesday but his condition grew worse.

Maryam, 45, whose request to visit her ailing father for an hour was turned down by an accountability court earlier in the day, was rushed to the hospital from Kot Lakhpat Jail after the Punjab Home Department granted her permission on the directives of Prime Minister Khan, the report said.

Maryam was sent to jail on a 14-day judicial remand last month by an accountability court in a money laundering case. Her remand was further extended by two more days on Wednesday.

Pakistan Prime Minister Imran Khan directed the Punjab government to ensure that Sharif gets the best possible medical care in accordance with the wishes of his family.

After meeting Nawaz, Maryam also fell sick and was allowed to stay in a room next to the one where her father has been undergoing treatment, the report said.

According to Geo TV, Maryam has been admitted to VVIP ll, while her father is admitted in VVIP-l.

She is going through various tests at the hospital, the report said.

Punjab Health Minister Yasmin Rashid met the former premier later told reporters that she was satisfied with the treatment.

We have informed him [Nawaz] about his condition and told him that we can arrange any doctor that he wants to treat him, she was quoted as saying by The Express Tribune.

Even his personal physician is satisfied by the steps we have taken, Mr. Rashid added.

The minister said Mr. Sharif’s blood pressure was normal and he had tested negative for dengue.

There was bleeding from the gums when he brushed this morning but there is no cause for alarm. It’s under control, she said, referring to the complication of internal bleeding that follows a drop in platelet count.

The minister said the dosage of some medicines to Nawaz had been stopped as a precautionary step.

She added that Nawaz might be administered steroids if needed. We are being cautious because of his kidney problems.

According to sources, a six-member medical board formed to examine Nawaz was unable to ascertain the cause behind the sudden decline in the platelet count, the report said.

Hong Kong cracks down on protesters

Hong Kong authorities on Friday charged pro-democracy activist Joshua Wong with organising an illegal protest as they tighten a clampdown on unrest that has plunged the Asian financial hub into its biggest political crisis in more than two decades. Mr. Wong, who led pro-democracy demonstrations five years ago that foreshadowed the latest turbulence, is the […]

A nurse in Germany has been arrested on suspicion of poisoning five premature babies with morphine, the police said Thursday, adding that the infants had survived. The woman was taken into custody on Wednesday after investigators found a syringe containing breast milk and traces of morphine in her locker at Ulm university hospital in southern […]

Two people were injured in a massive explosion at a Tata Steel plant in the United Kingdom on Friday. The steel plant is located in Port Talbot, South Wales. Tata Steel in Europe confirmed on Twitter that two of their employees were “slightly injured” in the accident. “We can confirm two of our employees were […]