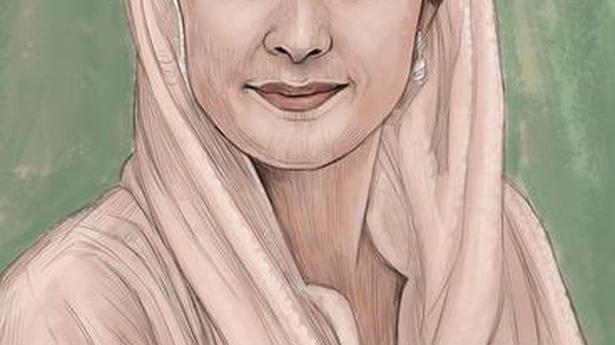 Like what Benazir Bhutto did in the 1980s, Maryam Nawaz is mobilising millions against the government and its military backers

The Generals of Rawalpindi are historically worried of daughters who want to avenge the wrongs done to their fathers. Maryam Nawaz knows this, and she infuses her speeches generously with tales of her father. Nawaz Sharif, the former Prime Minister, fell gravely ill and nearly died in the custody of the military-backed government of Prime Minister Imran Khan, she would say. “You love Nawaz Sharif and he is suffering and you too are suffering,” she said at a rally last week in Mansehra, Khyber Pakhtunkhwa, connecting the tottering economic condition of Pakistan with the ailing condition of Mr. Sharif, who is undergoing treatment in London.

In the absence of her father and other leading relatives, Ms. Maryam, the eldest of the third generation of the Sharif dynasty, is credited with scripting the current political movement that the Pakistan Muslim League-Nawaz (PML-N) has undertaken to bring the masses to the streets. From Punjab to Khyber Pakhtunkhwa and Sindh, her public meetings are being attended by millions of people who are concerned about the deteriorating economic condition of the country.

Apart from the already existing debt regarding the China-Pakistan Economic Corridor, there is the burden of the Saudi debt. With the challenge of the COVID-19 pandemic and the country staying on the ‘grey list’ of the dirty money watchdog Financial Action Task Force (FATF), the Pakistani economy faces an uncertain future. Ms. Maryam and other opposition leaders blame the government for the economic woes of the country.

Ms. Maryam was a teenager when the ‘daughter of the east’ Benazir Bhutto returned to Lahore in April 1986. The sea of humanity that came to meet Benazir at the airport was the first signal that the foundation of the military dictatorship of General Zia ul Haq was shaky. From the first rally of April 10 onward, Benazir spoke of her father former Prime Minister Zulfiqar Ali Bhutto, who was executed, and her brother Shahnawaz, who was allegedly poisoned to death in France. Ms. Maryam has borrowed the same language from Benazir’s legacy and is using these expertly to shake the Imran Khan government.

Ms. Maryam often talks of the political exile of her father and the death of her mother Kulsum, whose funeral parts of the family could not attend. She says the anti-corruption case that sent Mr. Sharif to jail for 10 years and gave her a seven-year jail term are politically motivated. Mr. Sharif’s political problems are connected to the publication of the Panama Papers in July 2017, which alleged that the Sharifs had acquired a huge amount of wealth that they had stored in offshore companies.

The narrative has shifted in three years. If the government’s plan was to strike terror in the heart of the PML-N by sending Mr. Sharif on a compromise exile, what seems to have happened is just the opposite. During Ms. Maryam’s rallies, the roadsides are plastered with the image of the daughter standing tall next to her father.

Born on October 28, 1973, in Lahore, she got her early education from the Convent of Jesus and Mary in the city. In the late 1980s, she enrolled in King Edward Medical College in Lahore to become a doctor. But she did not complete the degree. Following the 1999 military coup of Gen. Pervez Musharraf, which toppled Mr. Sharif’s government, she remained under house arrest for four months, before being sent to Saudi Arabia with her family.

She became active in politics in the early 2010s, after the fall of the military regime. In the 2013 general election, Ms. Maryam was in charge of Mr. Sharif’s election campaign. The PML-N won 166 seats in the 342-member National Assembly and Mr. Sharif became the Prime Minister for the third time.

In 2018, Mr. Sharif had to resign after the Supreme Court disqualified him from holding public office after his name appeared in the Panama Papers. Following Mr. Khan’s rise to power, the government turned against the opposition in the name of fighting corruption. Ms. Maryam was suddenly in the forefront of the fight-back against the regime, which is backed by the military.

When she was jailed and released in October 2019, Ms. Maryam turned it into a political weapon. She alleged that cameras were installed in the jail to track her movements. “I have gone to jail twice and if I speak about how I, a woman, was treated in jail, they (the Imran Khan government) will not have the audacity to show their faces.”

London-based Pakistani journalist Sajid Iqbal pointed out that Ms. Maryam has carefully cultivated the emotional quotient of Pakistan politics that was left vacant by the Khan government. Pakistan, Mr. Iqbal says, loves the grand political drama, which is a feature of South Asian politics, and the people of Pakistan were not getting that under the Khan government. “In Maryam, they are sensing the emotional connect once again.”

Ms. Maryam has already gone where no Pakistani political leader of her kind had gone earlier. In a rally in Quetta, the capital of the restive Balochistan province, she confidently called activist Adeeba Qambrani to the stage and said, “No longer will husbands and brothers of Balochistan go missing.” It was a powerful gesture that also drew criticism, with newspapers reminding Ms. Maryam about the red lines of Pakistani politics.

Ms. Qambrani’s three brothers were taken away by the military. After the rally, she consoled grieving women who had members of their families missing because of the continued crackdown. The images from Quetta are unprecedented as politicians of Islamabad have rarely empathised with the suffering of the families of the activists and students who have gone missing.

Mr. Iqbal says Ms. Maryam, in her public mannerisms and activities, has brought hints of South Asian strong women leaders as diverse as Benazir Bhutto and Jayalalithaa. “She is approximately the age when Jayalalithaa made her mark, and has a narrative force to back her,” said Mr. Iqbal.

Married at the age of 19, Ms. Maryam, 47 now, is already a grandmother. In 2015, Prime Minister Narendra Modi dropped by at the Sharif property near Lahore when her daughter was married.

The rallies that have propelled Ms. Maryam to the headlines are being carefully supported by her close party colleagues. She is being supported by Rana Sanaullah, a party stalwart, her husband Safdar Awan, and Baloch leader Akhtar Mengal, among others. The rough behaviour of the authorities when they arrested her husband from their hotel room in Karachi, which came to be known as the “Karachi incident”, had triggered strong protests.

A key challenge for Ms. Maryam will be establishing links with the powerful military, which has not fully repaired ties with the Sharif family since Mr. Sharif joined hands with Benazir in 2006 to overthrow the Musharraf regime. Now, Ms. Maryam is attacking the military from public platforms over its support for the Khan government. But ultimately, tackling the Generals would be the biggest test of Ms. Maryam’s political career.

Plant-based products that do not contain meat can be sold, EU lawmakers rule Source: thehindu.com Related

Pakistan’s Parliament on Tuesday unanimously passed a resolution expressing “unflinching and unwavering support” to the Kashmiri people and demanding India to reverse its decision to revoke the special status of Jammu and Kashmir. The National Assembly or lower house passed the resolution on the eve of what Pakistan observes as the Kashmir Solidarity Day on […]