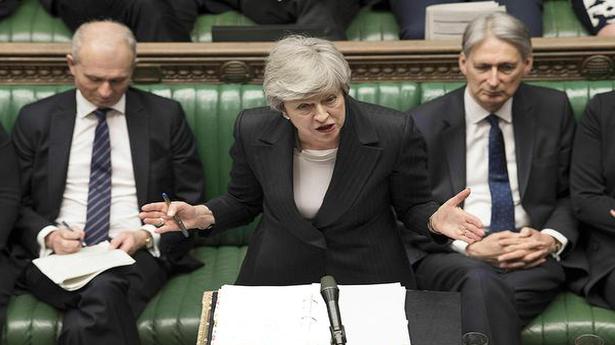 The British government on Thursday postponed a crucial Brexit vote scheduled for the first week of June, following an outcry from hard-line Brexiteers over concessions made by Prime Minister Theresa May.

The beleaguered Premier is in the last throes of a tumultuous period in power focussed all-but exclusively on guiding her fractured country out of the European Union (EU).

“We will update the house on the publication and introduction of the Withdrawal Agreement Bill on our return from the Whitsun recess” on June 4, government official Mark Spencer told MPs.

Mr. Spencer said the government had planned to hold the vote on a landmark piece of legislation to implement Brexit on June 7 but had not been able to fix this date.

Ms. May is under intense pressure to resign after holding out the prospect of a parliamentary vote on a second referendum to try and persuade MPs to support the divorce deal she has struck with EU leaders.

The deal has already been rejected three times in Parliament, forcing a delay to the planned date of Brexit on March 29, and still faces strong cross-party opposition.

Meanwhile there are already several leading Conservatives, including members of her own Cabinet, who are campaigning to take over from Ms. May when she quits.

The Prime Minister’s woes were made worse on Wednesday when Andrea Leadsom — one of Cabinet’s strongest Brexit backers — resigned from her post as the government’s representative in Parliament over her handling of the slowly-unfolding crisis.

“I no longer believe that our approach will deliver on the (2016) referendum results,” Ms. Leadsom said in her resignation letter.

In her response, Ms. May thanked Ms. Leadsom for her “passion, drive and sincerity”, but took issue with her assessment of the government’s Brexit strategy.

“I do not agree with you that the deal which we have negotiated with the European Union means that the United Kingdom will not become a sovereign country,” Ms. May said.

Ms. May has already promised to step down no matter the outcome of her fourth attempt to ram her version of Brexit through Parliament.

But even that sacrifice — and a package of sweeteners unveiled on Wednesday that included a chance for lawmakers to get a second Brexit referendum — failed to win hearts and minds.

“It’s time for the Prime Minister to go,” Ian Blackford, of the pro-EU Scottish National Party, told Ms. May as she tried to defend her latest proposals in Parliament.

Ms. May ignored the question and called the upcoming vote Britain’s last chance to leave the EU with a negotiated deal that can avert economic chaos. Parliament should “stop ducking the issues and get on with the job that British people instructed us to do,” she said.

Many of Thursday’s newspaper front pages pictured May leaving Downing Street late on Wednesday apparently with tears in her eyes. “May set to go after Brexit fiasco,” said The Sun tabloid.

Thursday’s European elections are being interpreted in Britain as a referendum on Brexit and on Ms. May’s ability to get the job done.

They make grim reading for the government team, with Nigel Farage’s Brexit Party well ahead in the polls. The current deadline for Brexit set by EU leaders is October 31.

The Brexit Party and leading Conservatives are calling for Britain to leave the EU on that date without an overall deal but businesses fear this could cause severe disruption.

India sent more than 202,000 students to the U.S. in 2018-19, the second largest after China which for the tenth consecutive year remained the largest source of foreign students in America, according to a report released on Monday. The ‘2019 Open Doors Report on International Educational Exchange’ said the number of foreign students in the […]

No single country is adequately protecting their children’s health, environment or future, according to a report released by a Commission of over 40 child and adolescent health experts from around the world, convened by the World Health Organization (WHO), UNICEF and The Lancet journal. According to the report, the health and future of every child […]