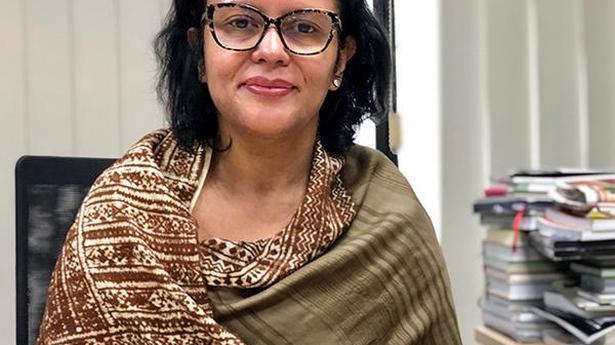 Endless bouquets, endless food and endless photo opportunities. These are the words that Rubana Huq uses to define how congratulatory messages have occupied a big part of her life. Social media was set ablaze with felicitations after Ms. Huq was elected the first woman president of the influential garment makers’ association in 36 years of its history.

The time since the election on April 6 has been overwhelming for Ms. Huq, managing director of Dhaka-based Mohammadi Group. To walk into her offices on the 10th floor of Lotus Kamal Tower is to encounter a buzzing horde of people waiting with bouquets to greet her.

“I’ll risk saying this. When we come into a new position, the experience should be a humbling one, not one of being overwhelmed by felicitations and congratulatory messages,” Ms. Huq says.

For the next two years, Ms. Huq will lead an organisation known as Bangladesh Garment Manufacturers and Exporters Association (BGMEA). It started in 1983 virtually as a “men’s club” and has remained so, despite its status as the most powerful industry lobbying group for 4,500 clothing factories that employ an estimated 4 million workers, mostly women.

Ms. Huq’s tenure will not be smooth sailing and she is keenly aware of it. “Being a woman is tough because everybody thinks he has the authority to tell me how the organisation should be run. And it’s sad,” she says. “They’re all trying to tell me that this is how it is done.” Ms. Huq has an answer ready for them: everybody has his or her own style and she refuses to accept dictated terms.

The garment industry accounts for more than 80% of Bangladesh’s exports. As the country is the second largest clothing exporter after China, the world keeps a close watch on it. For Ms. Huq, one of the key responsibilities will concern telling a better story about Bangladesh to the world. “What is mostly happening in our industry is that we are busy fire-fighting and we don’t often look at the vision. While we are fighting the immediate, the important stage is often ignored. I think we should concentrate both on the immediate and the important.” Ms. Huq vows to change the way the BGMEA is run. “I don’t believe one president can solve everything. The whole board must be involved. I will have to activate all my board members…”

Going forward, she will leverage a pool of young minds on her team to reform the organisation. “I’m lucky that we have a lot of young people. We will be able to think differently.”

Ms. Huq jokingly lumps herself with “half-intellectuals” who can think and strategise and are hopeful about tomorrow. A cornerstone in her vision is her optimism about small industrial units coming together to build a single, larger company with expanded capacity. That’s a concept she is going to push hard as she lays down her reform plans. If a company, for example, has only six manufacturing lines, it will have limited products to offer. If smaller companies join hands and establish 24 production lines under the same roof, they will have added capacity and can market themselves differently. “Collaboration is the word, competition is not… Let’s have a joint, collective country narrative,” Ms. Huq says.

One of her disruptive ideas — to run the BGMEA with professionals — will face a fierce internal push-back. In her view, the BGMEA is not a place to be run by manufacturers; it should be run by seven professionals concentrating on areas like image-building, price negotiations with global retailers, and wage and skills compatibility. Ms. Huq also recommends a “superpower committee” within the government, which will be looking at the garment industry.

The wave of felicitations will soon be over. With a palpable sense of real work washing over her, Ms. Huq says: “Ideally, right now, I should be sitting and charting our journey because we have to reorganise the BGMEA structurally. It’s important for me to think quietly… Strategising is my biggest challenge.”

Arun Devnath is a journalist based in Dhaka

Southeast Asian countries considered more emergency powers on Monday to tackle the threat of the virus as the biggest daily jump in cases in Malaysia took the number of infections in the region above 4,000. The virus has killed nearly 100 people since the number of cases started to shoot up early this month. Nearly […]

An absconding brother of slain Pakistani social media celebrity Qandeel Baloch, who was also an accused in her murder case, has been arrested with the help of Interpol, police said. A senior police official told Dawn News that following the arrest on Saturday, Mohammad Arif has been handed over to Muzaffarabad police station in Multan. […]

Flags touting independence flapped above the dusty streets of Bougainville Friday on the eve of a landmark referendum, as once rebel fighters voiced excitement they may achieve at the ballot box what they could not on the battlefield. “I fired many bullets to protect my beloved Bougainville,” said former rebel strongman Chris Uma as he […]