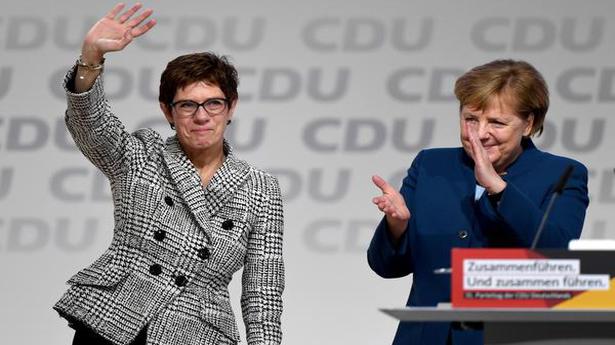 Chancellor Angela Merkel’s center-right party plunged deeper into crisis on Monday following a debacle in a regional election, as the long-time German leader’s successor unexpectedly announced that she wouldn’t stand for the chancellorship.

Annegret Kramp-Karrenbauer informed leading members of Merkel’s Christian Democratic Union that she will begin the process of organising a leadership contest in the summer. Germany is scheduled to hold its next general election in the fall of 2021 and the 65-year-old Merkel, who has led Germany for 15 years, said two years ago that she won’t run for a fifth term as chancellor.

The move throws German politics into further turmoil, days after Merkel’s party was heavily criticised for its handling of a vote for governor in the state of Thuringia that saw both the Christian Democrats and the far-right Alternative for Germany party back a centrist candidate. The vote broke what is widely regarded as a taboo around German political parties cooperating with extremist parties.

Kramp-Karrenbauer, often referred to by the acronym AKK, took over the leadership of the Christian Democrats in December 2018 after beating out Health Minister Jens Spahn and Friedrich Merz, a former party veteran sidelined by Merkel before she became chancellor in 2005.

Yet Kramp-Karrenbauer, 57, who is also Germany’s Defence Minister, has struggled to boost the party’s declining election results amid a stiff challenge from the far-right.

The fiasco in Thuringia State further highlighted tensions in the center-right Christian Democrats after the party’s regional lawmakers ignored a recommendation from Berlin not to back a centrist candidate against the left-wing incumbent.

It was unclear how the latest development would affect Merkel’s earlier plans for her succession. Among the names currently being bandied around as possible party leaders are Spahn, Merz and Armin Laschet, the governor of North Rhine-Westphalia, Germany’s most populous state.

Spahn and Laschet are considered centrists in the Merkel tradition, whereas Merz has tried to appeal to the conservative wing of the party that has flirted with the far-right Alternative for Germany.

A drawing by late South African leader Nelson Mandela of the door of his prison cell on Robben Island — where he was held for 18 years — will be put up for auction in early May in New York. Bonhams, which will host the sale on May 2, has put the value of “The […]

Pakistan Prime Minister Imran Khan said on Wednesday that his government would try to revive Afghanistan peace talks that recently broke down between the United States and the Taliban militant group. “I assure you that we will use full force so that these dialogues proceed further. It is unfortunate that these peace talks were suspended,” […]