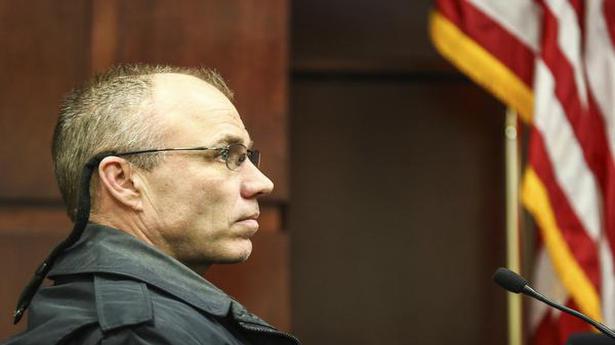 A white Michigan police officer whose house had an apparent Ku Klux Klan document on display and for sale has been fired.

Peterson says a redacted version of the inquiry report would be released to the public sometime next week.

The Muskegon Police Department opened an internal investigation of Anderson after a potential homebuyer, who is black, reported seeing a framed KKK application at Anderson’s home.

Anderson served on the Muskegon police force since 1997. He was cleared of wrongdoing in the 2009 shooting of an unarmed black man, who, an investigation found, used Anderson’s police radio and another object to severely beat the officer.

Muskegon County Prosecutor D.J. Hilson has said the results of the city’s inquiry will determine whether the shooting will be re-evaluated.

Law enforcement officials in Virginia said Thursday that they’ve taken down a multi-state drug ring and seized enough cheap fentanyl from China to kill 14 million people. The bust was announced in the wake of growing efforts to stem the flow of fentanyl from Chinese labs to the United States. The synthetic opioid often comes […]

2 more rallies in Hong Kong after protesters clash with police

The Hong Kong protests began two months ago against a proposed extradition law to China, but have expanded to include demands for a more democratic government and other grievances. On Sunday, protesters carrying umbrellas, a symbol of the demonstrations, gathered in two parks in separate areas of the city. At one protest, a flutist and […]