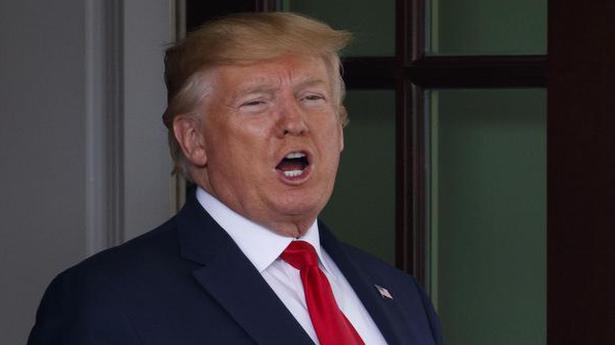 U.S. President Donald Trump renewed his attacks on Sunday on four Democratic congresswomen he launched xenophobic tweets against last week, demanding they apologise “for the horrible (hateful) things they have said.”

“They should apologise to America (and Israel) for the horrible (hateful) things they have said. They are destroying the Democrat Party, but are weak & insecure people who can never destroy our great Nation!” the President tweeted.

The comments come a week after Mr. Trump sparked a firestorm of outrage when he attacked the left-leaning lawmakers in a series of tweets, saying they should “go back” to their countries of origin.

The group — all American citizens, three of whom were born in the U.S. — are of Hispanic, Arab, Somali and African-American descent. In a rare move, Mr. Trump was rebuked by the Democratic-controlled House of Representatives on Tuesday for “racist comments” against the women, who are known as the “Squad.”

The following day chants of “Send her back!” broke out at the president’s “Make America Great Again” rally in Greenville, North Carolina, when he again attacked the women.

Mr. Trump claimed falsely that Ms. Omar had said the terrorist organization Al-Qaeda made her “proud” and he described the Congresswomen as “left-wing ideologues (who) see our nation as a force of evil.”

Mr. Trump later said there was “great energy” at the rally but claimed he was not pleased by the taunts.

“I was not happy when I heard that chant,” he said. “I didn’t like that they did it, and I started speaking quickly” to move on with his speech.

Television footage showed, however, that Mr. Trump let the chants continue for more than 13 seconds, only resuming speaking as they died down.

Analysts say the president’s performance in Greenville demonstrated that without a Democratic presidential candidate to focus on yet, he plans to make inflammatory attacks on the Squad a centerpiece of his 2020 re-election strategy.

Two days after the rally he falsely accused the Congresswomen of using the phrase “evil Jews,” and Ms. Ocasio-Cortez in particular of calling Americans “garbage.”

Several of the Democratic presidential hopefuls who plan to run against him and a few Republicans have urged Mr. Trump to tone down the rhetoric.

Ron Johnson, a Republican senator from Wisconsin and the chair of the Senate Homeland Security Committee, said Sunday he didn’t agree that the Congresswomen were incapable of loving their country.

“I find it unfortunate so many parts of our public debate are getting stuck inside a racial framework when what I would like to see is us moving toward that color-blind society,” he told CNN’s “State of the Union.”

But the President has made it clear — despite the risk of inflaming racial tensions and widening the partisan divide — that he believes he has latched on to a winning strategy.

Mr. Trump tapped into grievances among white blue-collar and rural Americans to eke out a narrow victory in 2016, winning 57% of white voters while his rival Hillary Clinton won 37%.

Democratic congressman Elijah Cummings, the African-American chairman of the House Oversight Committee, told ABC’s “This Week” that the “send her back” chants reminded him of painful experiences fighting segregation in the 1960s.

“It’s extremely divisive and I don’t think this is becoming of the president of the United States of America, the leader of the entire world. We can do better than that.”

He added that the Congresswomen targeted by Mr. Trump “love their country” and work hard to move closer to the “perfect union that our founding fathers talked about.”

He said he had “no doubt” Mr. Trump was a racist, a charge rejected by White House senior policy advisor Stephen Miller.

“I fundamentally disagree with the view that if you criticize somebody and they happen to be a different color skin, that that makes it racial criticism,” Mr. Miller told “Fox News Sunday.”

Coronavirus may never go away, warns WHO

China says Taiwan can only participate under the “one China” principle, in which it accepts it is a part of China. Source: thehindu.com Related

Riot police clashed with anti-government protesters across Hong Kong on Sunday as masked activists vandalised businesses deemed sympathetic to Beijing in another weekend of chaos in the financial hub. Rallies erupted in multiple neighbourhoods, with some protesters blocking roads, sabotaging train tracks, and trashing pro-China businesses. Police said an officer was taken to hospital after […]