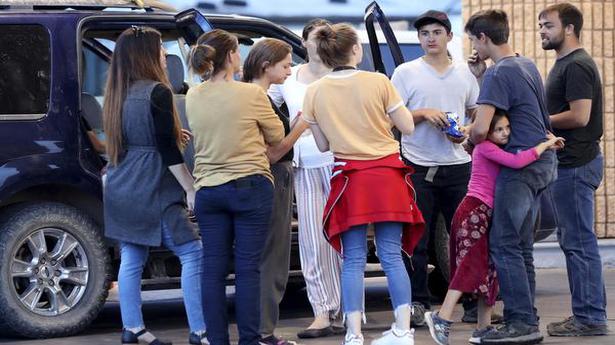 An 18-vehicle caravan carrying about 100 members of Mormon families escaping after a violent attack in Mexico arrived in Arizona on Saturday.

The families came nearly a week after an attack on Monday in which nine women and children were killed by what authorities said were people from drug cartels.

On Saturday, families went in and out of a gas station in Douglas near the port of entry as the sun began to set, the Arizona Daily Star reported.

They filled up on gas, put air in their tires and got food before getting back on the road on their way to Tucson and Phoenix. Their trucks were loaded with boxes, bicycles, spare tires and bags, all their belongings packed as they left the communities in Mexico that their families have called home since the 1950s.

The families had lived in two hamlets in Mexico’s Sonora state- La Mora and Colonia LeBaron. Other residents of the hamlets planned to depart in the coming days.

Monday’s deadly attack occurred as the women traveled with their children to visit relatives.

The spread-out community traces its origins to the end of polygamy more than a century ago by The Church of Jesus Christ of Latter-day Saints, forcing Mormon families in the U.S. with multiple wives to establish offshoots elsewhere.

Bryce Langford, whose mother was one of the women killed, told the Daily Star Saturday that he was on his way to visit his brother at a hospital in Tucson.

Langford’s mother, Dawna Ray Langford(43), was killed along with two of her sons, ages 11 and 2. She is survived by 11 children and her husband, Bryce Langford told the newspaper.

Of the children who escaped, one was shot in the face, another in the foot. One girl suffered gunshot wounds to her back and foot.

Another of Mr. Langford’s brothers hid six children in brush and walked back to La Mora to get help.

“We’re very proud of him,” Mr. Langford told the newspaper. “To be able to make those kind of decisions under those circumstances is something not a lot of people can say they can do.”

A girl, who was initially listed as missing, walked off in another direction, despite her gunshot wounds, to get help.

Mr. Langford said the community has learned more about cartel hit men in the area in recent months, and people had been considering moving. After Monday’s ambush, they decided it was something they had to do for their own safety, he told the Daily Star.

Most of the families are traveling to Phoenix, and others are heading to Tucson. They are not sure where they will settle down in the long term, Langford said.

Mr. Langford, who was raised in La Mora but now lives in North Dakota, said it wasn’t easy for his family to leave behind the land they have called home for more than 50 years.

“The assets that they’ve acquired down there are tremendous,” he said. “And to have to up and leave from one day to the next and leave all that behind, there’s definitely a lot of sad people here.”

Japan has cancelled a maritime fleet review planned for Monday, a spokesman for the Maritime Self-Defence Force said, after a fierce typhoon pounded Tokyo and surrounding regions over the weekend, causing flooding and widespread power outages. Last held four years ago, the review was due to include 46 naval vessels and 40 aircraft. Ships from […]

Indian-origin U.S. Senator Kamala Harris of California announced on December 3 the end of her 2020 presidential campaign after failing to garner support in key states despite an early rise in the polls, according to a campaign source. “I’ve taken stock and looked at this from every angle, and over the last few days have […]

U.S. billionaire Michael Bloomberg has launched a charm offensive to convince black voters, an important bloc in Democratic politics, that he is the right candidate to take on President Donald Trump in November. The former New York Mayor rallied supporters in Texas on Thursday, with his sights set on “Super Tuesday” on March 3, when […]