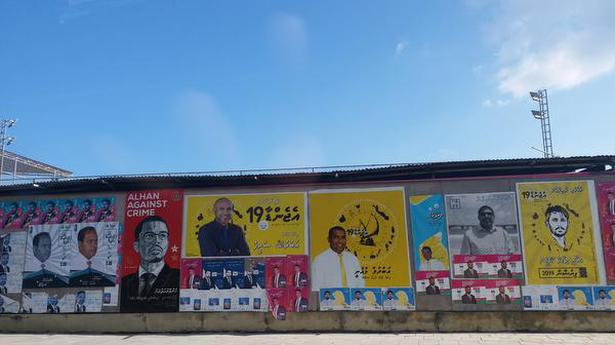 A pre-election survey conducted by Lokniti in the last week of March suggests that three decisions of the National Democratic Alliance government led by Prime Minister Narendra Modi taken between January 7 and February 26 might have the ability to change the course of what could have been a close election.

The Bharatiya Janata Party (BJP) has never regarded those who disagreed with it as anti-national, L.K. Advani, former Deputy Prime Minister and a founding member of the party, wrote in a blog. The BJP has denied Mr. Advani ticket to contest from Gandhinagar in Gujarat, which elected him six times to the Lok Sabha.

Mr. Modi has repeatedly stated that Pakistan and his political opponents are working in tandem to defeat him.

The release of a biopic on Prime Minister Narendra Modi, which was scheduled to be released nationwide on Friday, has been put off indefinitely, its producer Sandip Ssingh said on Thursday.

“This is to confirm, our film PM Narendra Modi is not releasing on 5th April. Will update soon,” Mr. Ssingh tweeted.

Basically, the voters have seen me for the last nine years. In the last election, they have seen that I don’t lie. Chandrababu Naidu said promised to waive off farm loans, knowing very well there was a huge ₹87,612 crore worth of agricultural loans, which no State government would be in a position to waive off, says Jagan Mohan Reddy.

Former Union Minister P. Chidambaram on Thursday threw a challenge to Finance Minister Arun Jaitley on the Armed Forces (Special Powers) Act by asking him why he was keeping quiet on the withdrawal of the controversial law from BJP-ruled Tripura, Meghalaya and parts of Arunachal Pradesh.

The Madras High Court on Thursday criticised the Justice A. Arumughaswamy Commission of Inquiry (CoI) for adopting a “strange” procedure during its inquiry into the circumstances that led to the hospitalisation and consequent death of former Tamil Nadu Chief Minister Jayalalithaa on December 5, 2016, and said that Apollo Hospitals was “compelled” to approach the court only because of such bizarre acts.

The Assembly elections in Andhra Pradesh have been reduced to a vote simulating a provincial presidential binary, with people having to make a choice between a young challenger, Y.S. Jaganmohan Reddy, who has been waiting in the wings for quite some time to occupy the Chief Minister’s post, and a seasoned, never-say-die, time-tested incumbent, N. Chandrababu Naidu.

With the Supreme Court quashing the February 12 circular of the Reserve Bank of India (RBI) on stressed asset resolution, its governor Shaktikanta Das said on Thursday that the the central bank would come up with revised norms.

At the post-monetary policy press conference, Mr. Das said, “In light of the Hon’ble Supreme Court’s order, the Reserve Bank of India will take necessary steps, including issuance of a revised circular, as may be necessary, for expeditious and effective resolution of stressed assets.”

Six months after electing Ibrahim Mohamed Solih as President in a high-stakes election, Maldivians are gearing up for another crucial vote in Saturday’s parliamentary poll, whose outcome will impact the prospects for political stability in the island nation.

Performances in the Indian Premier League should not be the criterion for World Cup team selection, avers India ODI vice-captain Rohit Sharma.

At a panel discussion, featuring Kevin Pietersen, Brian Lara, Mahela Jayawardene and Smriti Mandhana, after the unveiling of website cricket.com, Rohit said: “The IPL should not be the criterion (World Cup team selection). We have played enough international cricket in the last four years to see where we stand.

Terming the huge cut in corporate tax rates by the Centre early this week as a “bold” step and a pre-Deepavali gift to India Inc., Chief Minister Yogi Adityanath on Sunday hoped the ₹1.45 lakh crore tax break would help propel India into a USD 5 trillion economy and U.P. into a USD 1 trillion […]

Iran resumed uranium enrichment at its underground Fordow nuclear facility, the country’s Atomic Energy Organisation (AEOI) said on Thursday, further stepping away from its 2015 nuclear deal with major world powers. The agreement bans enrichment and nuclear material from Fordow. But with feedstock gas entering its centrifuges, the facility, built inside a mountain, will move […]

Afghanistan election commission said on December 22 incumbent President Ashraf Ghani won the majority of September 28 presidential election votes in delayed preliminary results from a poll that plunged the country into political uncertainty. The Independent Election Commission (IEC) said the total turnout in the presidential election, which was marred by allegations of massive fraud, […]