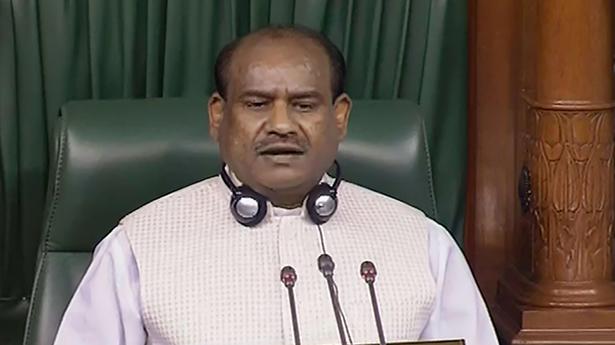 China on Tuesday reported 25 more deaths from a new viral disease as the U.S. government prepared to evacuate Americans from the city at the center of the outbreak. Authorities reported 24 deaths in Hubei province, where the virus first was detected in December, and one in Beijing, the Chinese capital.

No national total was immediately announced but with 81 deaths reported through Monday, that would make the toll at least 106.

Concerned by the European Parliament’s decision to discuss six resolutions on the Citizenship (Amendment) Act (CAA), 2019, and the situation in Jammu and Kashmir, Lok Sabha Speaker Om Birla has written to its President David Sassoli, “urging” him to reconsider the resolutions critical of India. “As members of the Inter Parliamentary Union, we should respect the sovereign processes of fellow legislatures, especially in democracies,” Mr. Birla wrote in the letter, adding that it was “inappropriate for one legislature to pass judgment on another.”

Senior BJP leader and Union Law Minister Ravi Shankar Prasad on Monday alleged that the Shaheen Bagh protest in Delhi was “a textbook case of a few hundred people trying to suppress the silent majority”, offering a platform to the tukde tukde gang under the guise of opposition to the Citizenship (Amendment) Act (CAA). He said those trying to fragment India were getting cover at Shaheen Bagh, where the tricolours were being waved.

The Supreme Court on Monday asked the government to explain why a law meant to protect the transgender community requires a magistrate’s certificate as a prior condition for the State to even identify a transperson. A Bench led by Chief Justice of India Sharad A. Bobde issued formal notice to the government on the petition filed by Swati Bidhan Baruah, an Assam-based advocate and transgender rights activist, who argued that the “right to self-identification forms part of right to life under Article 21 of the Constitution”.

More than 600 members of eight extremist groups in Assam gave up arms at an official programme on January 23, but one of them — the National Liberation Front of Bengalis (NLFB) — has raised eyebrows. Reports quoting people in districts such as Baksa and Chirang in western Assam said many of the 301 surrendered members of the “little-known” NLFB were petty traders or minor craftsmen such as carpenters. This has led to questions regarding the so-called “surrender drama” and of the members of “equally obscure” outfits such as the National Santhal Liberation Army and the Adivashi Dragon Fighters who allegedly laid down arms.

The Union government on Monday invited bids for 100% stake sale of Air India (AI) and transfer of management control along with its complete share in two subsidiaries-low-cost international carrier Air India Express and ground-handling arm AISATS. The government has offered to hive off liabilities worth nearly ₹40,000 crore to sweeten the deal.

Extreme delay in getting approval from the Ministry of Defence (MoD) has meant that the Indian Air Force (IAF) helicopter aerobatic team Sarang cannot perform at the Singapore air show 2020. The rejection comes despite Singapore giving extra time for confirmation, official sources said.

The Muslim personal law, which allows practices like polygamy and nikah halala, is a “cultural issue” and inextricably interwoven with the religion of Islam. The Constitution allows the continuance of the different practices of various religions until the State succeeds in its endeavour to secure a Universal Civil Code (UCC), the All Indian Muslim Personal Law Board explained to the Supreme Court on Monday.

Vice President Venkaiah Naidu on Monday indirectly hit out the European Union (EU) lawmakers for moving resolutions on Jammu and Kashmir and the Citizenship Amendment Act (CAA) 2019, saying India didn’t need “advice or guidance” and there was no scope for outside interference in India’s internal matters.

Three people, including two men aged 40 and another in his 30s from Pune, and a 36-year-old man from Mumbai, have been quarantined as a precautionary measure to curb the novel strain of Coronavirus (nCoV) that has led to an outbreak in China. While the Mumbai patient, a resident of Tardeo, had visited Shanghai and Guangzhou, the 40-year-old from Pune had recently travelled to Shanghai.

Hours after earmarking an aircraft on standby for an evacuation flight to Wuhan, the epicentre of the coronavirus outbreak, Air India officials called it off on Monday. They said the special sortie from Mumbai had been put on hold until further instructions from the government. Sounded out by the government, Air India pulled out a Boeing 747 for the sensitive operation. “The 423-seater double-decker jumbo aircraft will bring back, among others, students stranded in Wuhan,” an airline official said in Mumbai. The 12-member crew, rostered for a 5 p.m. departure, had been pulled out, he said. It was not clear whether a team of doctors would travel along.

China’s capital on Monday recorded its first death from a deadly coronavirus as it struggles to contain a rapidly spreading disease that has sparked global alarm, with countries scrambling to evacuate their citizens from the epicentre of the epidemic. The fatality in Beijing raises the death toll from the new virus to 82, with more than 2,700 people infected across the nation. The government has sealed off Wuhan and other cities in Hubei province, effectively trapping tens of millions of people including thousands of foreigners, in a bid to contain the virus as the Lunar New Year holiday unfolds.

Prince Andrew has given “zero cooperation” to the FBI in its investigation into late sex offender Jeffrey Epstein, despite publicly offering his assistance, a US prosecutor said Monday. The British royal denies claims he had sex with a 17-year-old girl procured by Epstein and said in November he was “willing to help any appropriate law enforcement agency with their investigations, if required.” But New York attorney Geoffrey Berman, who is leading an investigation into possible co-conspirators of the disgraced US financier, said Andrew was yet to respond to a request by the FBI and his office for an interview.

According to the new constitution of the Board, “The senior most Test cap among the members of the [senior selection] committee shall be appointed as the chairman.” Among the three candidates vying for the two vacancies, L. Sivaramakrishnan, Venkatesh Prasad and Ajit Agarkar — the tenures of selection panel chief M.S.K. Prasad and Gagan Khoda are coming to an end — the former India and Tamil Nadu leg-spinner is tipped to be the chairman since the Board of Control for Cricket (BCCI) rules back him.

New Zealand wicketkeeper Tim Seifert is not too worried about the team’s first two defeats in the T20I series against India affecting the team’s World T20 preparations as he feels they still have time to get their act together before the tournament kicks off in October. “We are not playing our best at the moment. There are 20 odd games before the World Cup, and that tournament is the pinnacle, so we will get there (in preparation),” Seifert said here on Wednesday.

Federal investigators on Monday sifted through the wreckage of the helicopter crash near Los Angeles that killed basketball legend Kobe Bryant and eight other people, hoping to find clues to what caused the accident that stunned the world.

Nepal was the first South Asian country to establish diplomatic relations with the Jewish State on June 1, 1960 Source: thehindu.com Related

Former Pakistan Prime Minister Nawaz Sharif has been granted bail for six weeks by the Supreme Court on health grounds. The terms of the bail include that Mr. Sharif “shall not leave or be allowed to leave the country”. He can now be treated anywhere in the country. The leadership of the Pakistan Muslim League-Nawaz […]

It comes a day after Israel announced an agreement to establish diplomatic relations with Bahrain Source: thehindu.com Related