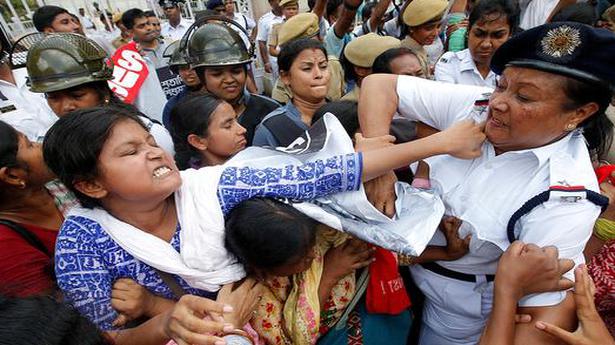 The Standing Committee on Finance has shied away from estimating the quantum of black money in and outside India, saying that different methods by various agencies are yielding vastly differing figures.

The death of children in Muzaffarpur in Bihar due to acute encephalopathy could have been prevented had a health awareness campaign been conducted and correct information provided to the families, said an Indian Medical Association (IMA) study team, which released its ground-report on Monday.

The team said that it can be reasonably concluded that the prevailing heat and humidity, together with malnutrition, contributed substantially to the deaths. Dehydration, hypoglycaemia and the heat syndrome too played a significant part.

There is “absolutely a possibility” that Pakistan could be on its blacklist after the international financial watchdog’s next meeting in October in Paris, the outgoing president of the Financial Action Task Force (FATF), Marshall Billingslea, said on Friday. The comments were made at a press briefing at the end of the FATF plenary held in Orlando, Florida, an audio call of which was released to the press on Monday morning.

Pakistan had “significant” work to do and was, with regard to an action plan agreed in June 2018, “lacking in almost every respect”, Mr. Billingslea said.

Government officials said it would be “premature” to suggest that India could be cut out of the Regional Comprehensive Economic Partnership (RCEP) being negotiated by 16 countries led by the ASEAN bloc, if it doesn’t agree to join it by the year-end.

The officials rejected a suggestion to that effect by Malaysian Prime Minister Mahathir Mohammed, who spoke on the sidelines of the ASEAN summit held in Bangkok on Sunday.

The Maharashtra Chief Minister’s official residence, as well as bungalows of several senior Ministers, owe the Brihanmumbai Municipal Corporation nearly ₹8 crore in water bills, and the corporation has included these properties in its defaulters’ list. The information was revealed in response to a Right to Information (RTI) query. Meanwhile, the government has clarified that dues were paid till November and the rest will be paid immediately.

The BMC has thousands of crores pending in water tax from defaulters across the city, many of whom are government organisations. It has now come to light that the Public Works Department, which maintains government bungalows of all State Ministers located in and around Malabar Hill, owes the BMC around ₹8 crore.

But what are basic rights? How are they different from other fundamental rights? Basic rights flow from basic needs such as physical security or subsistence. Needs are different from wants. You may want a chocolate every morning but don’t need it. Heavens won’t fall if you don’t get it. But basic needs are different: their non-fulfilment can cause great harm, even kill. The failure to get an antibiotic if you have a bacterial infection can hurt you very badly. Heavens will fall if you don’t get it! Moreover, wants are subjective; you cannot be mistaken that you desire that chocolate. But you may be misguided, even unaware of what you need. You may not be able to tell if you need an antibiotic because your mind can’t tell the difference between bacterial and viral infections. This determination is done by a more objective criterion. Needs depend on the way human bodies are constituted. They are a solid necessity; one cannot get on without them. Nor can they be fulfilled by substitutes. For us, nothing can take the place of water, food and air.

The chairman of the U.S House Foreign Affairs Committee (HFAC), Eliot Engel, wrote to U.S. Secretary of State Michael Pompeo on Monday, saying that there was a growing view that the Trump administration was coercing India on various fronts rather than negotiating with it. Mr. Engel, whose Committee has oversight responsibilities over the State Department, sent his letter as Mr. Pompeo’s tour of Asia, including India, kicked off.

The letter highlights the timing of the U.S.’s withdrawal of GSP (preferential trade access) benefits to India and the removal of waivers for sanctions on importing Iranian oil and it urges Mr. Pompeo to reaffirm the India-US partnership and bring coherence to it.

Hemasiri Fernando, who was Defence Secretary before the April 21 bombing of three churches and three hotels, should be investigated for his failure to prevent or minimise the attacks, Attorney General Dappula de Livera said.

Investors could soon see a drop in trading costs if market participants pass on the benefits of interoperability that will kick in from next week.

There’s no stopping Shakib Al Hasan! The 32-year-old dished out another all-round show — 51 off 69 balls, followed by a five-wicket haul (five for 29) — as Bangladesh defeated Afghanistan by 62 runs on Monday.

After putting up a modest 262 for seven at the Hampshire Bowl, Bangladesh bundled out the opponent for 200 to climb up to the fifth spot in the table.

Pakistan will be keeping a close eye on Donald Trump’s two-day visit to India, hoping that the United States President would offer to play a mediation-level role to de-escalate tensions between India and Pakistan. The tensions between the two countries escalated after August 5, 2019, after the abrogation of provisions of Article 370 in Jammu […]

Trump slams studies that contradict him

“A Trump enemy statement,” he said of one study. “A political hit job,” he said of another. As President Donald Trump pushes to reopen the country des Source: thehindu.com Related

One day after its historic impeachment votes, the Democratic-led House gave President Donald Trump an overwhelming bipartisan victory on Thursday regarding a renegotiated trade agreement with Canada and Mexico. By a 385-41 vote, the House approved a Bill that puts in place terms of the United States-Mexico-Canada Agreement. The legislation passed after House Speaker Nancy […]