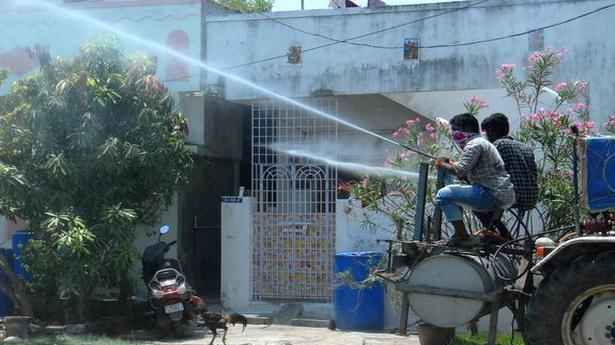 India reported three deaths and over 370 new cases on April 1 — the highest-ever single-day increase in its COVID-19 tally.This brought the total confirmed cases to 1,637 and took the death toll to 38. One hundred and thirty two persons have been cured/discharged from hospitals after recovery, the Union Health Ministry said at its daily press briefing, which was the shortest in a month as questions were restricted to a couple of media outlets.

The impact of the lockdown could be gauged only after two weeks, government as well as independent experts suggest. On the evening of March 24, Prime Minister Narendra Modi announced a nationwide 21-day lockdown to arrest “community transmission” of the coronavirus. Between March 24 and April 1, the number of COVID-19 positive cases has more than doubled — from 606 on March 25 to 1,637 on April 1. This, however, was slower — about half the rate of growth from the week before when only 151 cases were confirmed on March 18.

Chief Minister Arvind Kejriwal on Wednesday announced that the mobile phones of all those who have been asked to home quarantine themselves will be tracked by the Delhi Police to keep a check on their movement. Several other countries have used this technology to contain the spread of COVID-19, and that tracking mobile phones was one such way to ensure people abide by quarantine norms, he said.

Tamil Nadu’s tally of confirmed coronavirus disease (COVID-19) cases crossed the 200-mark on Wednesday. With 110 more persons who attended the Tablighi Jamaat conference at Nizamuddin in Delhi testing positive for COVID-19 in 15 districts, the total number of cases in the State increased to 234. Health Secretary Beela Rajesh said of the 110, one person was from Myanmar and another from Indonesia.

In a development that is causing concern to the State government, three more COVID-19 related deaths were reported on Wednesday taking the tally to nine. There was a sudden spike in the number of positive cases today with 30 patients detected with COVID-19. Incidentally, all three deceased, and 30 people who tested positive on Wednesday, returned after attending the Markaz prayers in Nizamuddin at New Delhi between March 13 and 15. All nine deaths recorded so far are of the participants of the religious congregation.

The Centre informed the Supreme Court on Wednesday that it has already facilitated the return of 1142 Indians — 787 pilgrims, 219 students and 136 others — from Iran and they are quarantined in various locations in the country in the wake of the COVID-19 pandemic. A status report filed by the Ministry of External Affairs in the Supreme Court said there were 6,000 Indian nationals in various provinces of Iran. They included 1100 pilgrims mainly from the Union Territories of Ladakh and Jammu and Kashmir and the State of Maharashtra, 300 students primarily from J&K, and over 1000 fishermen from Tamil Nadu (744), Kerala (70) and Gujarat (215).

The National Investigation Agency (NIA) registered a case on Wednesday to probe the terror attack at a gurdwara in Kabul last week, in which 27 Sikh worshippers, including an Indian, was killed. Muhammed Muhsin, a 29-year-old man from Kerala’s Kasaragod, is suspected to be one of the three attackers. A senior official said there were indications that more than one Indian could have been involved in the attack. Also a suspect is Sajid Kuthirummal, a shopkeeper from Kasaragod, part of the group of 21 men and women that left India in 2016 to join the Islamic State in Khorasan Province (ISKP) in Afghanistan.

Out of the 40 papers for Class 10 and 12 board examinations that the Central Board of Secondary Education was forced to put on hold due to the situation caused by the COVID-19 pandemic, only papers in 12 key subjects for Class 12 will be rescheduled. The remaining examinations will not be held, CBSE said in a statement on Wednesday evening. As the situation is still uncertain, the Board has not announced fresh dates for the rescheduled examinations. Instead, it promised to give students, schools and all stakeholders at least 10 days notice as and when it is in a position to hold the examinations again.

The National Disaster Management Authority (NDMA) has received offers for more than 5.38 lakh items, including over 1,000 digital thermal scanners and 100 full-body thermal scanners, in donation to fight COVID-19. As of Wednesday, the donated items included 8,275 N95 masks with exhalation valves, 43,000 triple-layer surgical masks, about 230 personal protective coverall garments, 8,770 face shields and 2,638 personal protective goggles that can be used by doctors.

United States and Spain continue to bear the brunt of the COVID-19 pandemic with consistent increases in the number of new cases recorded in the past week. Over 54% of the 48,757 new cases recorded on March 31 were from the U.S. The U.S. is also witnessing an exponential increase in the number of new deaths recorded along with Italy in the same period. On the recoveries front, Germany, France and Spain are faring better.

The world was quickly approaching one million confirmed coronavirus cases on Wednesday as a six-week-old baby died in the United States in what was believed to be the pandemic’s youngest victim. As governments expanded lockdowns that have affected half the planet, global agencies warned that parts of the world could face food shortages if authorities fail to navigate the crisis properly.

United Nations Secretary-General Antonio Guterres has warned that the world faces the most challenging crisis since World War II, confronting a pandemic threatening people in every country, one that will bring a recession “that probably has no parallel in the recent past.” There is also a risk that the combination of the disease and its economic impact will contribute to “enhanced instability, enhanced unrest, and enhanced conflict,” the U.N. chief said at the launch of a report on the socioeconomic impacts of COVID-19-on Tuesday.

A six-week-old infant has died of complications relating to COVID-19, the governor of the U.S. State of Connecticut said Wednesday, in one of the youngest recorded deaths from the virus. Governor Ned Lamont tweeted that the newborn was “brought unresponsive to a hospital late last week and could not be revived.” “Testing confirmed last night that the newborn was COVID-19 positive,” he said and added, “This is absolutely heartbreaking. We believe this is one of the youngest lives lost anywhere due to complications relating to COVID-19,” he sad.

The heads of three global agencies warned on Wednesday of the risk of a worldwide “food shortage” if authorities fail to manage the ongoing COVID-19 crisis properly. Many governments around the world have put their populations on lockdown causing severe slow-downs in international trade and food supply chains. Panic buying by people going into confinement has already demonstrated the fragility of supply chains as supermarket shelves emptied in many countries.

Welcoming Afghanistan President Ashraf Ghani’s decision to form a team for intra-Afghan negotiations that will include the Taliban, the government said this is a “positive step” for the process of reconciliation in the country. “We view the formation of the team as a positive step which would lead to a peaceful and stable future for Afghanistan free from the scourge of externally sponsored terrorism,” said a statement issued by the Ministry of External Affairs. The statement followed a conversation between External Affairs Minister S. Jaishankar and U.S. Secretary of State Mike Pompeo to discuss cooperation on the COVID-19 pandemic.

Wimbledon was canceled on Wednesday because of the coronavirus pandemic, the first time since World War II that the oldest Grand Slam tennis tournament won’t be played. The All England Club announced after an emergency meeting that the event it refers to simply as The Championships is being scrapped for 2020. Wimbledon was scheduled to be played on the club’s grass courts on the outskirts of London from June 29 to July 12.

The stands were a blaze of light. In the middle, though, M.S. Dhoni shone the brightest. His bat speed and dextrous wrists had combined wonderfully as he sent a full ball from Nuwan Kulasekara for the maximum over long-on in the maximum city. You can freeze the frame. The stunning shot brought an entire nation to life. India had, on April 2, won the 2011 World Cup at Mumbai’s iconic Wankhede Stadium.

Olympic bronze medal winning wrestler Yogeshwar Dutt has a simple solution to the problem of staying confined at home in the time of a nationwide lockdown. Sharing how his determination helped him stay isolated for six months in South Africa while recovering from a knee surgery, Yogeshwar said the country’s collective willpower would beat the deadly COVID-19 virus.

On a recent sweltering Saturday, a day now reserved for protest in Hong Kong, a demonstrator named Wayne stepped past a row of plastic barricades, lifted a pair of binoculars and squinted. Four hundred meters away, a line of riot police stood with full-length shields, batons and tear-gas launchers. It was a familiar sight for […]

2 dead, 3 injured in a school shooting in Russia

Russian police say a student has killed a fellow student and wounded three more in a shooting at a college before taking his own life. Russia state Investigative Committee says the 19-year-old student in Blagoveshchensk near the border with China brought a hunting rifle to class Thursday and opened fire on students, shooting one dead […]

An anti-terrorism court in Pakistan on Tuesday accepted a plea of Mumbai attack mastermind and Jamat-ud-Dawa chief (JuD) Hafiz Saeed to club all six terror financing cases against him and his aides, and announce the verdict on completion of the trial. The anti-terrorism court or ATC had indicted Saeed and others on December 11 in […]