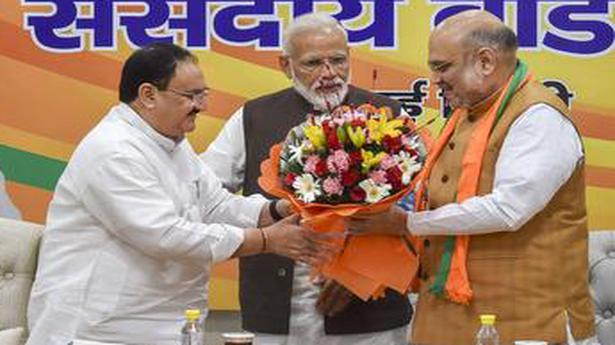 The BJP’s parliamentary board, in the presence of Prime Minister Narendra Modi, on Monday declared former Union Minister J.P. Nadda the party’s working president, after the incumbent Amit Shah joined the Union Cabinet.

Defence Minister Rajnath Singh made the announcement after a meeting of the board here.

As the first session of the 17th Lok Sabha commenced on Monday, Prime Minister Narendra Modi asked the Opposition to speak out on issues and not bother about their numbers, in a House where the ruling NDA has 353 seats.

Addressing the press before the session, Mr. Modi said he welcomed all new MPs as with them “comes new hopes, new aspirations and new determination to serve.” “When we come to Parliament we should forget Paksha [Treasury] and Vipaksha [Opposition]. We should think about Nishpaksh spirit’ [objective neutrality] and work in the larger interest of the nation,” he said.

Prime Minister Narendra Modi may have reached out to the Opposition parties on Monday asking them not to bother about their numbers in the Lok Sabha, but it would certainly matter when it comes to deciding the Leader of the Opposition.

Sources told The Hindu that the second term of the Modi government would follow its own precedent and would not offer the official post to the Congress since it has only 52 members as against the requirement of 55.

The Supreme Court on Monday agreed to hear a plea seeking to depute government-appointed uniformed security personnel at all government hospitals across the country for ensuring the safety and security of doctors.

A vacation Bench of Justices Deepak Gupta and Surya Kant posted the hearing of the petition, filed by advocate Alakh Alok Srivastava in the wake of a nation-wide protest by doctors against violence against them, for Tuesday.

Left parties have opposed the idea of ‘one nation, one election’ proposed by Prime Minister Narendra Modi, calling it undemocratic and against the principle of federalism.

Mr. Modi has called a meeting of the presidents of all political parties to discuss the idea on June 19. In his previous term too he had floated the idea though this is the first time he is holding a formal consultation with other parties.

Since the Narendra Modi government took power in 2014, the mind of democracy is under attack. There is intolerance towards differences. Democracy is facing political authoritarianism. The return of the Modi government at the Centre has tightened Hindutva’s grip on the political narrative. Despite the agrarian crisis, job unrest, and the hardships of demonetisation, the electoral outcome was in the BJP’s favour. Making political capital out of the air strikes on Balakot, playing up the threat to the nation’s security over real issues, and using divisive language worked for the BJP.

Morsy, a top figure in the Muslim Brotherhood who was the first democratically elected President in Egypt’s modern history, had been in jail since he was toppled by the military in 2013 after mass protests against his rule.

Beijing won’t let Hong Kong’s leader, Carrie Lam, step down even if she wanted to, a senior city government official close to her said on Monday, adding that a divisive extradition law she delayed on the weekend was effectively withdrawn.

Opposition to the proposed law allowing extradition to mainland China has sparked the city’s biggest and most violent street protests in decades over the past week.

Amid a slowing economy and a crisis in the shadow banking sector, Prime Minister Narendra Modi is likely to meet chief executives of Indian banks on June 21 to chalk out a blueprint for the banking sector for the next five years.

According to the bankers, they have been informed about the meeting, though a formal communication is yet to be received. The meeting assumes significance as the country’s GDP growth slowed to 5.8% in the January-March 2019 quarter, dragging down the full-year growth to a 5-year low of 6.8%. Credit flow to productive sectors of the economy has been impacted.

Surging U.S. Democratic presidential contender Elizabeth Warren came under repeated attack on her healthcare and tax policies in a debate on Tuesday, as moderate rivals pushed her to explain how she would pay for ambitious proposals, including her Medicare for All plan. Ms. Warren’s recent rise into a virtual tie with former Vice-President Joe Biden […]

U.S. to send troops to Saudi Arabia, hold off on striking Iran

The Pentagon on Friday announced it will deploy additional U.S. troops and missile defense equipment to Saudi Arabia and the United Arab Emirates, as President Donald Trump has at least for now put off any immediate military strike on Iran in response to the attack on the Saudi oil industry. Defense Secretary Mark Esper told […]

Hong Kong opposition groups called on Thursday for another major demonstration after the pro-Beijing government did not respond to demands of protesters. A number of protest groups, including student unions, called for supporters to mobilise on Friday, asking people to gather at the city’s main government complex to “hold picnics” outside the legislature starting 7 […]