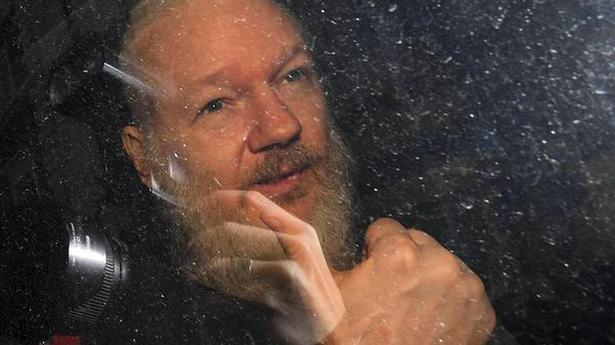 The development came on a day when the airline informed the exchanges that it had, further to its letter on April 2, grounded 10 more aircraft. With this, the airline’s fleet is believed to have fallen below 20 aircraft, a number crucial for Jet Airways to retain its right to fly international.

Voters do not need to know from where political parties get their funds, the government argued in the Supreme Court on Thursday.

The court cannot “kill” the electoral bonds scheme for the sake of transparency, Attorney General K.K. Venugopal said. He argued that the bond was an experiment to eradicate black money and the court should not intervene now. The government position was in contrast to the stand of the Election Commission of India.

“There is an anti-Modi wave coupled with a strong cyclone against the ruling AIADMK in Tamil Nadu. There is an upsurge among the people who have rallied and united as a force to remove the BJP-led Centre and the AIADMK regime led by Chief Minister Edappadi K. Palaniswami.

“The DMK and its allies have come together based on an ideological understanding, and we stand by the people. The alliance will secure the people’s mandate in all 39 Lok Sabha constituencies and the 22 Assembly constituencies, where byelections are being held.”

The Congress on Thursday backtracked on the writing of a letter to Home Minister Rajnath Singh alleging a “security breach” when party president Rahul Gandhi visited Amethi in Uttar Pradesh to file his nomination.

“There is no letter, there is no complaint. Let me make it very clear that the obligation of security, especially during election time, and in particular for a Special Protection Group (SPG) protectee, is squarely on the SPG, on the security forces and ultimately in some sense on the Ministry of Home Affairs (MHA),” said Congress spokesperson Abhishek Manu Singhvi at the party’s regular press briefing.

Referring to illegal migrants from Bangladesh as “termites”, BJP president Amit Shah on April 11 said his party will throw them out after coming to power at the Centre for a second term.

Addressing a rally in Raiganj, he alleged that the Mamata Banerjee-led Trinamool Congress government in West Bengal was only interested in appeasing minorities.

“The illegal immigrants are like termites. They are eating the grain that should go to the poor, they are taking our jobs. The T of TMC stands for Tushtikaran, (appeasement), M for Mafia and C for Chitfunds,” Mr. Shah said.

Words are important, especially in the heavily-nuanced English language, and those who invented that language certainly know how to use them. One can imagine the careful drafting in Whitehall that would have gone into formulating the Prime Minister’s statement. For comparison, in a press conference in Brussels the next day, Ms. May said that she “sincerely regretted” her failure in delivering a Brexit deal so far. “Deeply” is admittedly stronger than “sincerely”, but the nature of contrition expressed is identical.

WikiLeaks founder Julian Assange was convicted on Thursday by a London court of skipping bail in 2012 after an extradition order to Sweden over an allegation of rape.

Assange, who pleaded not guilty, will be sentenced a later date when he will face a maximum sentence of 12 months in prison for the offence.

President Omar al-Bashir, who ruled Sudan with an iron fist for 30 years, was on Thursday overthrown in a coup by the armed forces which announced a two-year period of military rule to be followed by elections.

In an address on state television, Defence Minister Awad Mohamed Ahmed Ibn Auf said Mr. Bashir, 75, was under arrest in a ”safe place” and a military council was now running the country.

Even as the Sterlite Copper imbroglio has become a major election issue for political parties in Tamil Nadu, Vedanta Ltd. has moved the Supreme Court with a special leave petition (SLP) seeking interim access to undertake maintenance activities at its plant in Thoothukudi.

The SLP also urged the apex court “to grant all approvals, permits, licences, certificates etc. that stood withdrawn or cancelled by the various statutory authorities.”

Less than 24 hours after Alzarri Joseph scampered a two off the final ball to give Mumbai Indians a thrilling win over Kings XI Punjab, Mitchell Santner smashed a six off the final delivery to script an incredible win for Chennai Super Kings over Rajasthan Royals at the Sawai Mansingh Stadium on Thursday.

Himachal Pradesh Power Minister Anil Sharma tendered his resignation from the Cabinet on Friday, days after his son Ashray Sharma was announced as the Congress candidate from the Mandi Lok Sabha constituency. The Minister was under attack from the ruling BJP and facing an uneasy equation with Chief Minister Jai Ram Thakur after he conveyed […]

An exchange of fire between the security forces comprising the Special Police Party of the Visakhapatnam district and the CRPF, and the Maoists took place near Mandapalle village, a village bordering Koyyuru and GK Veedhi, in Visakhapatnam Agency on Monday. It it learnt that about 15 to 20 hardcore cadres from the East Division of […]

Deputy Commissioner B. Sharat has appealed to political parties to appoint their booth agents for revising electoral rolls. Addressing a meeting of representatives of different parties at his office on Monday, he said the last date for verification and revision of electoral roll has been extended to November 18. “There are 2,368 stations in the […]