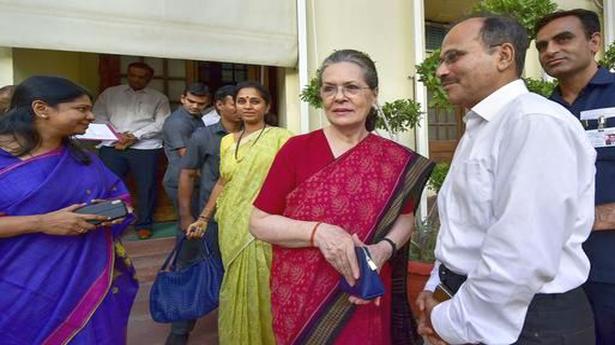 Leaders of many Opposition parties are likely to skip the meeting called by Prime Minister Narendra Modi to discuss his “one nation, one election” proposal.

Hong Kong leader Carrie Lam on Tuesday signalled the end of a controversial extradition bill that she promoted and then postponed after some of the most violent protests since the former British colony returned to Chinese rule in 1997.

In a closely watched press conference, Ms. Lam apologised for the turmoil but refused to say the bill would be “withdrawn”, only that it wouldn’t be re-introduced during her time in office if public fears persist.

Two Jaish-e-Muhammad (JeM) militants, including a member of its suicide squad whose vehicle was used to carry out the Pulwama attack on February 14, were killed in an operation of the security forces in Anantnag on Tuesday.

A soldier also died in the gunfight. Police said the militants, identified as Sajad Ahmad Bhat and Tawseef Ahmad Bhat from Bijbehara, were surrounded by security forces around 4 a.m. at Marhama village in Anantnag, “following a tip-off about their presence.”

Former West Bengal Congress chief Adhir Ranjan Chowdhury will be the party’s leader in the Lok Sabha. His colleague K. Suresh from Kerala will be designated as Chief Whip.

Though the Congress did not announce it officially, Congress Parliamentary Party chairperson Sonia Gandhi was seen informing other Opposition leaders on the floor of the House, including Sudip Bandopadhyaya of the Trinamool.

India has made great gains in providing basic sanitation facilities since the start of the millennium, accounting for almost two thirds of the 650 million people globally who stopped practising open defecation between 2000 and 2017.

However, a monitoring report by UN organisations released on Tuesday also shows that there has been absolutely no growth in the population with access to piped water facilities over that period, while large inequalities remain between rural and urban areas.

In another action aimed at cleaning up government service, President Ram Nath Kovind on Tuesday ordered the retirement of 15 senior officials of the Ministry of Finance.

This comes a week after the President ordered the retirement of 12 senior officials of the Finance Ministry for alleged corruption, extortion and sexual harassment.

First, how will “one nation, one election” work in case of premature dissolution of the Lok Sabha, for instance, as happened in late 1990s when the House was dissolved long before its term of five years was over? In such an eventuality, would we also dissolve all State Assemblies? Similarly, what happens when one of the State Assemblies is dissolved? Will the entire country go to polls again? This sounds unworkable both in theory and in the practice of democracy.

Second, as for the implementation of schemes of the government during the MCC period, only the new schemes are stopped as these could be tantamount to enticing/bribing voters on the eve of elections. All ongoing programmes are unhindered. Even new announcements that are in urgent public interest can be made with the prior approval of the EC.

China on Monday declined to confirm that it had hosted Mullah Abdul Ghani Baradar, the Taliban’s deputy chief on political affairs, ahead of a crucial seventh round of talks between the Afghan militant group and the U.S.

“I cannot confirm that and I have to learn and check about the relevant situation before answering your question,” Chinese Foreign Ministry spokesperson Lu Kang said in response to a question during his regular media briefing.

Former Chief Economic Advisor Arvind Subramanian’s analysis of economic growth is incorrect as it ignores the indicators related to the bulk of economic activity, such as those measuring the agriculture, services, and informal sectors, A. Vaidyanathan, former Planning Commission Member, has said in an interview.

Mr. Subramanian had recently written a paper for the Harvard University in which he had said that India’s GDP growth during 2011-17 had been over-estimated.

It rained sixes at Old Trafford on a bright and sunny Tuesday, as England captain Eoin Morgan played an incredible knock of 148 off just 71 balls, hammering 17 sixes — the highest in an ODI innings. England fell three short of the 400-run mark against Afghanistan, and won by 150 runs.

Morgan, who suffered a back spasm during the West Indies game in Southampton, was expected to miss a few games. However, the fit-again England captain waltzed to the fastest hundred in this edition — off just 57 balls — and the fourth quickest overall as he toyed with a listless attack.

Imports from U.S. to grow, trade Ministers to meet soon

Prime Minister Narendra Modi on Monday informed U.S. President Donald Trump that India planned to further step up imports, including of oil, from the U.S. and an estimated $4 billion of imports were already “in the pipeline”. The Modi-Trump meeting assumes significance in the wake of the strain in the bilateral relationship on trade and […]

Pakistani supporters staged protest outside the Indian High Commission in London on September 3. They held anti-Modi placards during the protest. They also caused damage to the premises. Pakistani supporters held protest over abrogation of Article 370 in Jammu & Kashmir. Source: thehindu.com Related