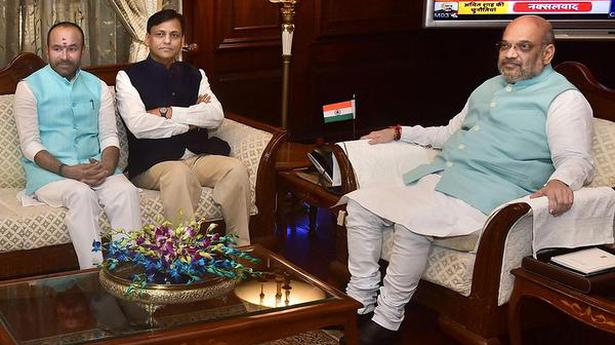 The note said that Mr. Subramanian’s paper “lacks rigour” and would not stand up to academic scrutiny.

A committee will be formed by the Narendra Modi-led government to prepare a road map for “One nation, one election”, Defence Minister Rajnath Singh announced here at the end of an over four-hour meeting with presidents of 21 political parties. Eleven political parties, including the Congress, skipped the meeting convened by the Prime Minister.

Speaking to reporters at the end of the meeting, Mr. Singh said, “Majority of the parties supported. CPI and CPI (M) raised questions about its feasibility but didn’t oppose the move. The Prime Minister then said he will form a committee regarding this issue.”

Almost a fortnight after Home Minister Amit Shah took charge, he allocated work to the two junior Ministers in North Block. While the management of other departments has been distributed among the two Ministers of State, Mr. Shah will hold charge of the Intelligence Bureau (IB) himself. Former Home Minister Rajnath Singh also had IB report directly to him.

The distribution of work comes at a time when Mr. Shah is expected to undertake his first official visit as a Home Minister to Jammu and Kashmir to oversee the preparations and security arrangements for the Amarnath Yatra that commences on July 1.

A Maruti 800 car is suspected to have been used in Monday’s terror attack on an Army patrol vehicle on the Arihal-Pulwama road in South Kashmir, initial probe suggests.

An improvised explosive device (IED) packed in a car parked by the road was detonated when a mobile vehicle patrol of the 44 Rashtriya Rifles passed by. Two Army personnel were killed and six others injured in the attack. The Army said it was “a failed attempt”.

Om Birla, BJP MP from Kot-Boondi in Rajasthan, was unanimously elected Lok Sabha Speaker on Wednesday and he promised in his maiden address from the chair that he would run the House in an impartial manner and “safeguard the interests of the members irrespective of the strength of their parties in the House.”

The first attempt to make in India was in the 1940s. Finance Minister Shanmukham Chetty’s first budget speech had identified increasing “internal production” as the economic priority. And this was achieved quite soon. Along with the quickening of the economy as a whole, the share of manufacturing had risen, the mocking epithet ‘Hindu rate of growth’ notwithstanding. This had not emerged as part of the moral victory of an oppressed people. The reason was that it had resulted from a surge in investment, led by the government. That resources could have been mobilised on such a scale in so short a time in an economy devastated by colonial rule is testimony to the availability of the three ingredients — design, resources and governance — necessary when contemplating a move to the next level, which is what aiming at a $5 trillion economy amounts to.

“India is one of our closest strategic partners in the Indo-Pacific region. The U.S.-India partnership stands upon a shared commitment to democratic values and the rule of law. As the President has repeatedly stated, the United States wants fair and reciprocal trade,” a State Department spokesperson told The Hindu via email, adding, “The United States is India’s top market for exports and U.S. companies see great opportunity in India.”

A fortnight after resigning from their ministerial positions in protest, two Muslim legislators were on Wednesday sworn in to the posts they earlier held.

Parliamentarians Kabir Hashim and Abdul Haleem took oath but seven the other former Ministers, who resigned with them, did not assume ministerial charge.

India has the highest average data usage per smartphone, reaching 9.8 GB per month at the end of 2018, according to a new study by Swedish telecom equipment maker Ericsson.

The report, released on Wednesday, also forecasts that this figure is likely to double to 18 GB per month per smartphone by 2024.

In a game reduced to 49 overs-a-side, New Zealand restricted the Proteas to 241 for six. The Kiwis lost opener Colin Munro early before Martin Guptill and Williamson forged a 60-run stand. Guptill was hit-wicket off a delivery from Andile Phehlukwayo.

A former nurse who liked to put patients into cardiac arrest because he enjoyed the feeling of being able to resuscitate them was convicted Thursday of 85 counts of murder, making him what is believed to be the worst serial killer in modern German history. Oldenburg court judge Sebastian Buehrmann sentenced 42-year-old Niels Hoegel to […]

A federal judge has ordered U.S. President Donald Trump’s accountants, Mazars USA, to comply with a subpoena from the House of Representatives Oversight Committee and submit financial records related to Mr. Trump to the Committee. The Committee had subpoenaed financial records and communications from the accountants pertaining to Mr. Trump, his businesses and charity, from […]

U.S. in talks with Russia, China on arms control: Trump

The United States is in talks with both Russia and China on a major arms control-like agreement, U.S. President Donald Trump has said. “We are looking at arms control right now. We are dealing with China, we are dealing with Russia,” Trump told reporters at the South lawns of the White House on Monday. “I […]