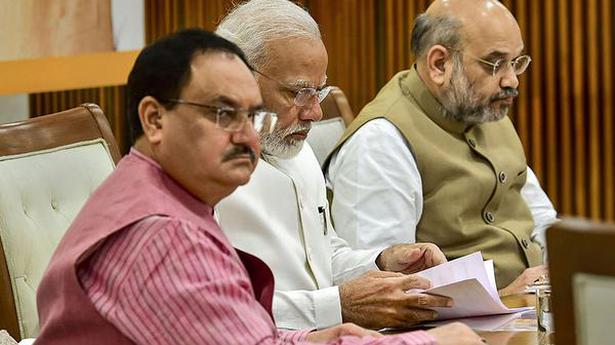 One week after it was announced with considerable fanfare at the start of Prime Minister Narendra Modi’s visit to the United States, several loose ends are yet to be tied up in the $2.5 billion (₹17,668 crore) investment planned by Indian PSU Petronet in American LNG company Tellurian.

The Congress on Sunday announced its first list of 51 candidates for the Maharashtra Assembly election, naming party bigwigs and repeating most sitting MLAs. The list does not include former Chief Minister Prithviraj Chavan, who represents the Karad South constituency. He is being persuaded to contest the Satara Lok Sabha seat.

Like the last time, Prime Minister Narendra Modi has opted to fly in and out of the Indian Institute of Technology-Madras (IIT-M) on Monday. Since he will be arriving and leaving the campus by a helicopter, there will be no traffic snarls on roads, say police. He is expected to leave the city by 1.15 p.m.

In a major push to emancipate new grassroots-level leadership in Jammu & Kashmir, the government on September 29 announced the polls for the Block Development Councils (BDCs) on October 24 across the State.

Billionaire entrepreneur Elon Musk has unveiled the latest iteration of his space company’s newly assembled Starship, outlining a speedy development timeline for the centerpiece vehicle of SpaceXs quest to launch humans to the moon and Mars.

Several hundred prisoners, convicted of offences other than murder, rape and corruption, will be released from jails across India on October 2 to mark the 150th birth anniversary of Mahatma Gandhi, officials said on Sunday.

The International Astronomical Union (IAU) has named an asteroid, discovered in 2006, after Indian classical singer Pandit Jasraj. The asteroid, or more formally known as a minor planet, is located between Mars and Jupiter, and was discovered on November 11, 2006, by the Catalina Sky Survey, whose telescopes are based in Arizona in the United States. The privilege of naming a planet is first given to discoverers, who have 10 years to propose a name.

Wishing citizens on the occasion of Navrathri, Prime Minister Narendra Modi on September 29 asked people to launch a campaign to celebrate the achievements of their daughters.

Can you recall the name of your ancestor from 20 generations ago? Or rattle off the names of all your forefathers, right up to the founder of your clan or ethnic group, centuries ago? Members of the Galo community in Arunachal Pradesh can, and this is made possible by their system of naming.

Nearly 10% of children in the age group of 5-9 years and adolescents in the age group of 10-19 years are pre-diabetic, 5% are overweight and another 5% suffer from blood pressure. These are among the key findings of the first-ever national nutrition survey conducted by the Centre, yet to be made public, providing for the first time hard evidence of the coexistence of obesity and undernutrition, among school going children.

Sources said that they have started running feeder services at many stations. For instance, there is a service from Government Estate and AG-to the Marina beach. Since, a large number of people gather at the Marina on Sundays and other public holidays, a 50% discount will draw more crowds to the Metro.

Russia is gearing up to intensify legislative cooperation with India in the coming months. As part of this process, Lok Sabha Speaker Om Birla is likely to visit Moscow in November, a source said.

US House Speaker Nancy Pelosi said on Saturday that public opinion is now on the side of an impeachment inquiry against President Donald Trump following the release of new information about his conversations with Ukrainian President Volodymyr Zelenskiy. Pelosi this week announced her support for an investigation after the surfacing of a whistleblower complaint that […]