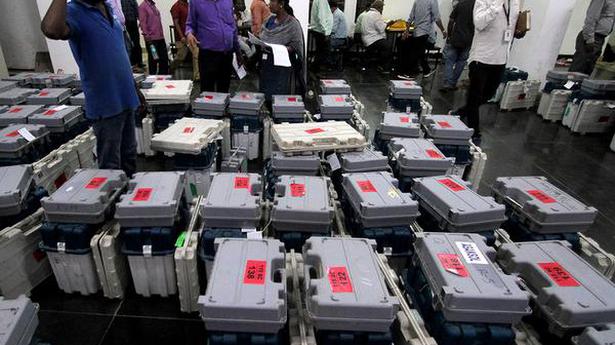 The Union Home Ministry has expanded the ambit of the probe into the 1984 anti-Sikh riots cases by enabling the Special Investigation Team (SIT) to reopen investigations in all the cases in which trial had been completed and the accused were discharged. A senior official said the SIT is examining the number of such cases that will be reinvestigated and sent for trial again.

The Rajya Sabha will debate electoral reforms on Wednesday following notices given by 12 Opposition parties. This is one of the first synchronised effort by the Opposition to come up with a coordinated floor strategy after the recent debacle in the Lok Sabha election. The notices were given by the Congress, Trinamool Congress, RJD, SP, BSP, AAP, CPI, CPI(M), DMK, Kerala Congress(M), IUML and NCP. BJP MP R.K. Sinha too had given notice.

In a fresh trouble for the Janata Dal (Secular)-Congress government in Karnataka, Congress MLAs Anand Singh and Ramesh Jarkiholi resigned from the Assembly on Monday, bringing the party’s strength down to 77. Mr. Singh represents Vijaynagara in Ballari district, while Mr. Jarkiholi was elected from Gokak in Belagavi district. Both have earlier been identified with the “rebel” camp that has threatened to destabilise the government.

During Question Hour, Union Minister for Labour and Employment Santosh Kumar Gangwar said that reports on the high unemployment rate were misleading, and said job creation was a priority for the government. He said the overwhelming mandate to the government indicated that people did not believe such “misleading reports”.

The Trinamool Congress on Monday reached out to the Left parties and Congress in the West Bengal Assembly to table a resolution on the “rise of communalism” and lynchings in the country and in West Bengal. Minister of State for Parliamentary Affairs Tapas Roy told reporters at the West Bengal Legislative Assembly that he had spoken to Leader of Opposition Abdul Mannan and Leader of Left legislature party Sujan Chakraborty on tabling a joint resolution in the House on the issue.

The anti-terrorism courts in Pakistan’s Punjab province have handed down up to five years imprisonment to 12 members of the banned Jamat-ud-Dawah (JuD) and Jaish-e-Mohammad (JeM) on the charges of terrorism financing. According to the Counter Terrorism Department (CTD) of the Punjab Police, it arrested the JuD and JeM members some time ago on the charges of terror financing and presented them before anti-terrorism courts of different districts of Punjab for trial.

The Supreme Court on Monday agreed to consider on July 30 a batch of petitions to have a Constitution Bench examine the validity of a constitutional amendment providing 10% economic reservation in government jobs and educational institutions. A Bench led by Justice S.A. Bobde said the pleas would be taken up for hearing on July 30, a non-miscellaneous day on which the case could be heard at length.

North Korea on Monday hailed the weekend meeting between leader Kim Jong-un and U.S. President Donald Trump in the Demilitarized Zone as “historic”, as analysts said Pyongyang was looking to shape the narrative to its own agenda. The two leaders agreed to “resume and push forward productive dialogues for making a new breakthrough in the denuclearisation of the Korean peninsula”, the official Korean Central News Agency said.

Cori Guaff served up the perfect excuse for playing hooky from school on Monday as the 15-year-old American caused one of the biggest shocks in Wimbledon history by dispatching Venus Williams 6-4 6-4 in the first round on Monday. Aged 39, Williams is considered Wimbledon royalty as she has been part of the All England Club family for over two decades, having won the singles title five times — including two before Gauff was even born.

Self-care, which mostly happens outside the formal health system, is nothing new. What has changed is the deluge of new diagnostics, devices and drugs that are transforming the way common people access care, when and where they need them. With the ability to prevent disease, maintain health and cope with illness and disability with or without reliance on health-care workers, self-care interventions are gaining more importance. Millions of people, including in India, face the twin problems of acute shortage of healthcare workers and lack of access to essential health services.

Prime Minister Narendra Modi on Sunday visited St. Anthony’s Shrine in Kochchikade, one of the sites of the horrific Easter Sunday attacks, soon after his arrival in Sri Lanka and paid tributes to the victims of the terror strikes, expressing India’s affirmation of solidarity with the counrty in the wake of the attacks.   “Started […]

Two injured in shooting outside Walmart in Tennessee

Two men have been shot in the parking lot outside a Walmart store in Tennessee, and one of the victims had life-threatening injuries, authorities said. The shooting happened around 1:30 pm on Tuesday, and the suspect fled in a vehicle, Chattanooga Police Department spokeswoman Elisa Myzal said. The second victim suffered injuries that were not […]

Corbyn says will not lead Labour into future UK election