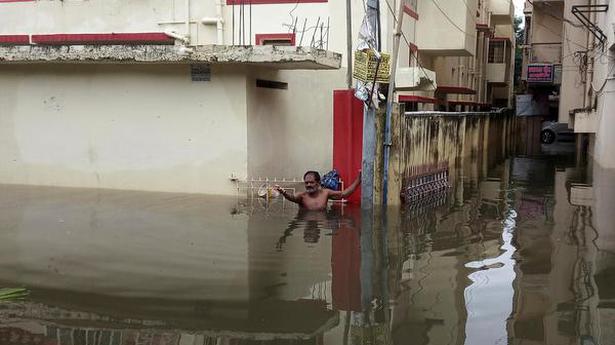 Elaborating on his comments from over two weeks ago that one day India expects to have physical jurisdiction over Pakistan-occupied Kashmir (PoK), External Affairs Minister S. Jaishankar reiterated India’s claim over the region.

While India this year may have recorded its highest monsoon rain in 25 years, an analysis suggests that new monsoon models, called the Monsoon Mission Coupled Forecast Model (CFS), deployed by the IMD over the last decade don’t do better than the older ones in long-range forecasting.

With the announcement of the Block Development Council (BDC) polls amid growing outrage over continued political detentions, the J&K government on Tuesday released seven senior leaders of the National Conference (NC), Congress and J&K Panthers Party (J&KPP) from the Jammu region

On the occasion of the 150th birth anniversary of Mahatma Gandhi, Prime Minister Narendra Modi declared the country open defecation-free, claiming success for the government’s initiative under which every household now apparently has access to a toilet.

Rejecting Pakistan’s claim in the case that dates back to 1948, the High Court of England and Wales ruled in favour of India and the Nizam’s descendants — now mostly based in Turkey and the U.K. — granting them access to a £35 million fund (worth approximately ₹306 crore)

With India emerging as a powerful nation on the global stage and experts and analysts probing which way it would tilt, External Affairs Minister S. Jaishankar on October 3 said the largest democracy would be a blend of the west and the developed world.

Iltija Mufti, younger daughter of former J&K chief minister and Peoples Democratic Party (PDP) president Mehbooba Mufti, was allowed by the Supreme Court to meet mother four weeks into her detention following the revocation of Article 370 and the state-wide clampdown. She speaks of a simmering anger in the Valley under lockdown for over 50 days.

Despite rising censorship of Twitter posts and accounts on the basis of legal demands from the Indian government, law enforcement agencies and others over the last five years, the lack of transparency behind suspensions, blocked tweets and the practice of shadow-banning has left users angry.

Following the hardships faced by customers in opening bank accounts, the government will review the norms for the same. Top bankers highlighted the problem at a meeting with Finance Ministry officials last week. They said the officials were open to reviewing the issue after they were briefed about the problems.

The announcement on a united opposition front was cancelled on Wednesday after the Congress and Nationalist Congress Party (NCP) failed to arrive at a solution after a series of meeting with smaller allies in Maharashtra.

Factionalism in the Haryana Congress reached party president Sonia Gandhi’s doorstep as supporters of former PCC chief Ashok Tanwar staged a protest outside her 10 Janpath residence over distribution of tickets for the Assembly polls.

While fans of ‘Megastar’ Chiranjeevi erupted in joy and broke into a dance to watch the ‘first day, first show’ of his latest movie Sye Raa Narasimha Reddy on Wednesday, seven sub-inspectors of police in Kurnool district had to face the music. The policemen now face disciplinary action after they “bunked” their duties to watch the new release.

Hyderi Manzil, a single storied house in north Kolkata where Mahatma Gandhi spent August 15, 1947 and a site that has emerged as a symbol of his fight against communalism was on Wednesday thrown open to the public as a full-fledged museum, depicting various aspects of the life of the Father of the Nation.

U.S. President Donald Trump has denounced the impeachment inquiry threatening his presidency as a “coup,” as his administration pushed back against the investigation. Mr. Trump’s comments came after Secretary of State Mike Pompeo vowed to prevent or delay five State Department officials from testifying in the investigation probing accusations that Mr. Trump abused his office by seeking dirt from Ukraine on a 2020 election rival.

Pakistan thwarted a spirited career-best century by Danushka Gunathilaka to defeat Sri Lanka by five wickets in the third and final one-day international in Karachi on Wednesday, taking the three-match series in the process. Gunathilaka’s 134-ball 133 lifted Sri Lanka to a challenging 297-9 in their 50 overs but Pakistan chased down the target in 48.2 overs for their first series win in 15 months.

A jihadist attack on a military camp in western Niger on January 9 left 89 soldiers dead, according to a new toll announced by the government on public radio on January 12. “After a thorough search, the toll has been established as 89 dead among friendly forces, and 77 dead for the enemy,” said spokesman […]

Watch | The Hindu Explains: Why is Turkey bombing Syria?

Turkey pounded Kurdish militia in northeast Syria for a second day on Thursday, forcing tens of thousands of people to flee and killing at least dozens of people in a cross-border assault on U.S. allies that has turned the Washington establishment against President Donald Trump. This video shows the offensive against the Syrian Democratic Forces […]

No reason for any country to include coal in COVID-19 recovery plans, says UN Chief

While no country was named, sources in the UN said the remark was in reference to the decision by India to launch the auction process for coal blocks for commercial mining. Source: thehindu.com Related