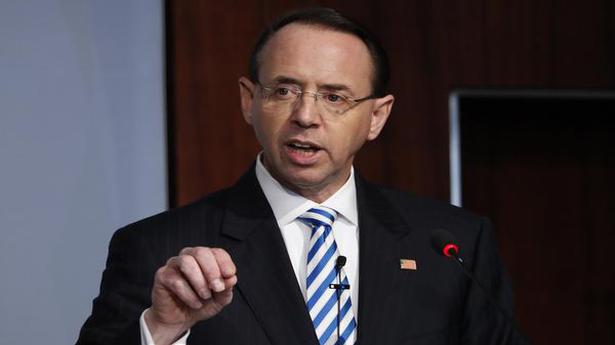 U.S. Deputy Attorney General Rod Rosenstein, who appointed Special Counsel Robert S. Mueller and oversaw his probe into Russian meddling in the 2016 election and related questions, handed in his resignation on Monday.

Mr. Rosenstein was expected to resign after the Mueller probe concluded and after William Barr, the new attorney general had assumed office, so his letter does not come as a surprise. The resignation will be effective May 11 , and brings a controversial, sometimes drama-filled term that began in April 2017 to a close. Mr. Rosenstein has been seen as wanting to balance the interests of many stakeholders, while doing his job, and had earned criticism from all quarters.

It started with a memo written by Mr. Rosenstein in May 2017 recommending that U.S. President Donald Trump fire then FBI director James Comey for his handling of the probe into Hilary Clinton’s use of a personal server for emails (Mr. Trump later indicated he had the Russia probe in mind when he decided to fire Mr. Comey). Mr. Rosenstein’s tenure is ending with him getting some of the flack for backing Attorney General Bill Barr’s four page summary of the Mueller report which, according to critics, misrepresents Mr. Mueller’s conclusions on Mr. Trump’s role in obstructing the probe.

During Mr. Rosenstein’s tenure were other controversies, including a report in the New York Times that, in 2017, shortly after Mr. Comey was fired, Mr. Rosenstein had discussed wearing a wire to his meetings with the President and wanted to recruit cabinet members to make a case for invoking the ‘25th Amendment’ (a constitutional provision enabling the removal of a sitting President on grounds of mental incapacitation).

The incident resulted in Mr. Rosenstein almost getting fired by Mr. Trump, who, from time to time, attacked Mr. Rosenstein for the Mueller probe, which Mr. Rosenstein had been overseeing since former Attorney General Jeff Sessions recused himself from its oversight. Conservatives in the House of Representatives had also filed impeachment articles against Mr. Rosenstein in 2018.

The tone of Mr. Rosenstein’s resignation letter is being seen as yet another attempt by the some as the Deputy Attorney General to stay in Mr. Trump’s good books. He says he is grateful for “the courtesy and humour you [ Mr. Trump] often display in our personal conversations”. Mr. Rosenstein signs off ,“We keep the faith, we follow the rules, and we always put America first,” words borrowed from Mr. Trump’s ‘America first’ campaign.

Mr. Trump has nominated Jeffery A. Rosen, deputy Transport Secretary , to replace Mr. Rosenstein. The nomination is expected to be confirmed by the Senate next month

The Russian army announced Thursday that a ceasefire has begun in Syria’s Idlib, the last major opposition stronghold in the country, in accordance with a Russ-a-Turkey agreement. From 1100 GMT “a ceasefire has been in place in the de-escalation zone of Idlib,” the Russian military’s Centre for Reconciliation in Syria said in a statement. Despite […]

Two Lithuanians and a Norwegian convicted of espionage in Russia were freed on Friday in exchange for two Russians who had been in prison in Lithuania. Yevgeny Mataitis and Aristidas Tamosaitis, who were convicted in 2016, have been reunited with their families, Lithuanian spy chief Darius Jauniskis said. Frode Berg, a Norwegian sentenced in Russia […]