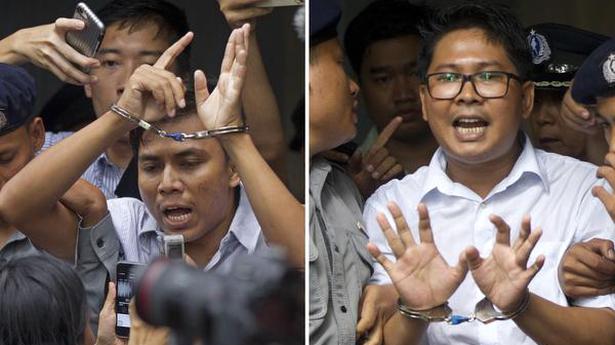 Myanmar’s Supreme Court on Tuesday rejected the final appeal of two Reuters journalists and upheld seven-year prison sentences for their reporting on the military’s brutal crackdown on Rohingya Muslims.

Wa Lone and Kyaw Soe Oo earlier this month shared with their colleagues the Pulitzer Prize for international reporting, one of journalism’s highest honors.

The court did not given a reason for its decision. Wa Lone and Kyaw Soe Oo, who are being held in a prison in Yangon, were not present for the ruling, but their wives were. Kyaw Soe Oo’s wife broke down in tears when the ruling was read.

The reporters were arrested in December 2017 and sentenced last September after being accused of illegally possessing official documents, a violation of a colonial-era law.

They denied the allegation and contended they were framed by police. International rights groups, media freedom organizations, U.N experts and several governments have condemned their conviction as an injustice and an attack on freedom of the press.

“Wa Lone and Kyaw Soe Oo did not commit any crime, nor was there any proof that they did,” Gail Gove, Reuters chief counsel, said in a statement after the ruling. “Instead, they were victims of a police setup to silence their truthful reporting. We will continue to do all we can to free them as soon as possible.”

Their appeal in January to a lower court was rejected on the ground that the lawyers for Wa Lone, 32, and Kyaw Soe Oo, 28, failed to submit enough evidence to prove they were innocent.

Khin Maung Zaw, a lawyer for the two, had said the latest appeal argued that lower court rulings involved errors in judicial procedure.

The Myanmar army’s brutal counterinsurgency campaign in the western state of Rakhine in response to attacks on security personnel in 2017 drove 700,000 members of the Muslim Rohingya minority to flee to Bangladesh.

Reporting on the crackdown is sensitive in Buddhist-dominated Myanmar because of worldwide condemnation of the military’s human rights abuses, which it denies.

The two reporters had worked on an investigation of the killing of 10 Rohingya villagers in Inn Din village, for which the government last year said seven soldiers were sentenced to up 10 years in prison with hard labor.

Investigators working for the U.N.’s top human rights body said last year that genocide charges should be brought against senior Myanmar military officers, while other critics accused the army of ethnic cleansing.

President Donald Trump is extending the voluntary national shutdown for a month as sickness and death from the coronavirus pandemic rises in the U.S. Also read: All about COVID-19 The initial 15-day period of social distancing urged by the federal government expires Monday and Mr. Trump earlier expressed interest in relaxing the national guidelines at […]

A clash broke out between two rival demonstrator groups assembled outside the Indian High Commission in London on Saturday (March 9). The two groups clashed during a demonstration called to protest against “atrocities on ethnic minorities in India” and counter-protests from groups including the Friends of India Society in the United Kingdom. According to news […]

Four civilians have been killed in the latest attack in the volatile northern region of Burkina Faso, security sources told AFP on Sunday. Saturday’s attack in Samboulga, in the northern province of Lorum, comes after armed men stormed a mosque in the town of Salmossi killing 16 on Friday, underscoring the difficulties faced by the […]