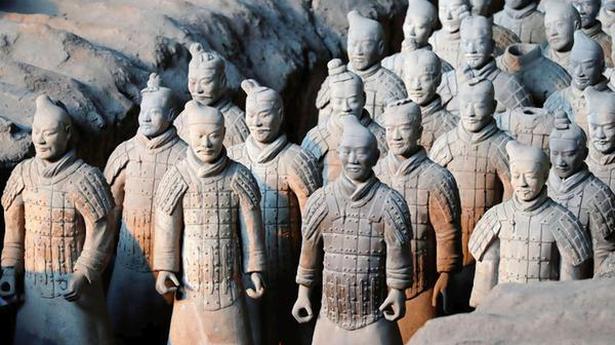 For decades, scientists have been perplexed by the marvellous preservation of bronze weapons associated with China’s famed Terracotta Warriors, retaining shiny, almost pristine surfaces and sharp blades after being buried for more than two millennia.

Research by an international team of scientists published on Thursday may solve the mystery while putting to rest an intriguing hypothesis: that ancient Chinese artisans employed an unexpectedly advanced preservation method using the metal chromium.

The preservation of weapons, including swords, lances and halberds, was due to factors such as the bronze’s high tin content and favourable soil composition, the scientists said after examining 464 bronze weapons and parts.

Chromium found on the bronze surfaces, they determined, was contamination from chromium-rich lacquer applied by the artisans to the terracotta figures and weapons parts.

Chromium played no role in their preservation. The Terracotta Army consists of thousands of ceramic warriors and horses alongside bronze chariots and weapons, part of the 3rd century BC mausoleum near the city of Xi’an for Qin Shi Huang, first emperor of a unified China.

Earlier studies had detected chromium on the surface of some weapons, spurring the hypothesis that the weapon-makers used a chromium-based treatment to prevent corrosion.

Sri Lanka on Saturday banned local Islamist extremist outfit NTJ and a splinter group, which are linked to the ISIS that has claimed the responsibility for the Easter bombings that left 253 people dead and several hundreds injured. National Thawheed Jammath (NTJ) leader Zahran Hashim, the mastermind behind the attacks, was killed inside the Shangri […]

Sixty killed in Houthi attack on camp in Yemen’s Marib

Iran-aligned Houthis attacked a military training camp in the Yemeni city of Marib on Saturday, killing 60 military personnel and wounding dozens others, Saudi state television said on Saturday evening. Al Ekhbariya television quoted sources as saying the attack was carried out with ballistic missiles and drones. A proxy war has been playing out in […]

Germany opened Monday a week of festivities marking three decades since the fall of the Berlin Wall, but a hint of a return of the Cold War and the rise of nationalism is dampening the mood. Leaders of former Cold War powers will be absent from anniversary festivities, as Donald Trump’s America First, Britain’s Brexit […]