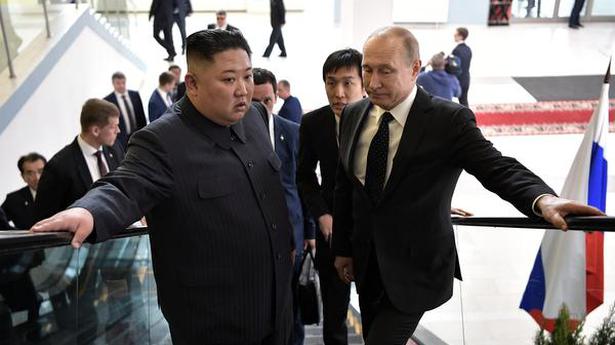 Russian President Vladimir Putin said after holding his first face-to-face talks with North Korean leader Kim Jong-un on Thursday that U.S. security guarantees would probably not be enough to persuade Pyongyang to shut its nuclear programme. Mr. Putin and Mr. Kim held a day of talks on an island off the Russian Pacific city of Vladivostok two months after Mr. Kim’s summit with U.S. President Donald Trump ended in disagreement.

The talks between Mr. Putin and Mr. Kim did not appear to have yielded any major breakthrough.

But Mr. Putin, keen to use the summit to burnish Russia’s diplomatic credentials as a global player, said he believed any U.S. guarantees might need to be supported by the other nations involved in previous six-way talks on the nuclear issue. That would mean including Russia, China, Japan and South Korea as well as the United States and North Korea, a long-standing format that has been sidelined by unilateral U.S. efforts to broker a deal. “They (the North Koreans) only need guarantees about their security. That’s it. All of us together need to think about this,” Mr. Putin told reporters after talks with Mr. Kim.

“…I’m deeply convinced that if we get to a situation when some kind of security guarantees are needed from one party, in this case for North Korea, that it won’t be possible to get by without international guarantees. It’s unlikely that any agreements between two countries will be enough.”

The Islamic State militant group claimed responsibility on Sunday for a suicide blast at a wedding reception in Afghanistan that killed 63 people, underling the dangers the country faces even if the Taliban agree a pact with the United States. The Saturday night attack came as the Taliban and the United States try to negotiate […]

Is Donald Trump now ready for war with Iran?

During his election campaign in 2016, Donald Trump vehemently criticised the Barack Obama administration for a nuclear deal with Iran in lieu of easing economic sanctions on the country. A week after entering the White House in January 2017, Trump issued an executive order that banned entry of Iranian citizens into the US in the […]

The European Union has drafted a resolution, cosponsored by dozens of countries including Australia, that has been gaining support and is expected to be approved in a vote at the World Health Assembly in Geneva this week. Source: thehindu.com Related