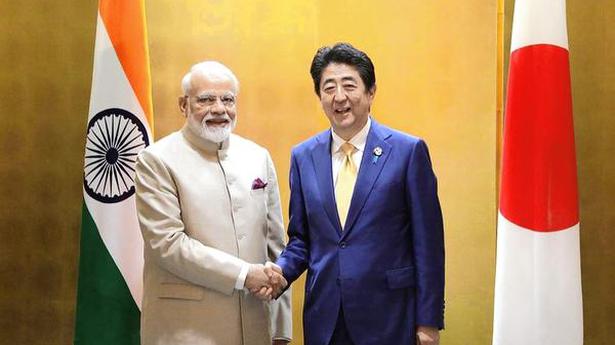 Prime Minister Narendra Modi on Thursday held wide-ranging talks with his Japanese counterpart, Shinzo Abe, on the global economy, fugitive economic offenders and disaster management, and announced that President Ram Nath Kovind would participate in the coronation ceremony of Emperor Naruhito in October.

It was the first meeting between the two leaders since the start of Japan’s Reiwa era and Mr. Modi’s re-election.

Mr. Modi thanked Mr. Abe for the warm welcome for him and the delegation visiting Japan for the G-20 Summit. He appreciated Japan’s leadership as the G-20 chairman.

Mr. Modi said he was looking forward to Mr. Abe’s visit later this year for the annual summit.

Later, Foreign Secretary Vijay Gokhale told presspersons that the meeting between the “old friends” was “warm” and they had a “very constructive and detailed discussion” on bilateral ties.

“Abe initially began discussion with his expectation from the G-20 Summit. They spoke about the importance of focussing on global economy,” Mr. Gokhale said.

“These are the areas where Abe hoped that he would get the understanding and support of the G20 members, including that of India,” Mr. Gokhale said.

Mr. Abe also referred to his forthcoming visit to India.

The two leaders also had a brief discussion on the Mumbai-Ahmedabad High Speed Rail Corridor and on a convention centre being built in Varanasi, Mr. Modi’s constituency.

They agreed on the delivery of both the projects on time.

Showdown of Cong. stalwarts to decide outcome in Shirdi

Towering over the key candidates in the contest for the Shirdi Lok Sabha constituency is the long-running feud between the two senior Congressmen in Ahmednagar district — Radhakrishna Vikhe-Patil and former State Revenue Minister, Balasaheb Thorat. It is the influence of these two that will decide the day for the candidates as the seat goes […]