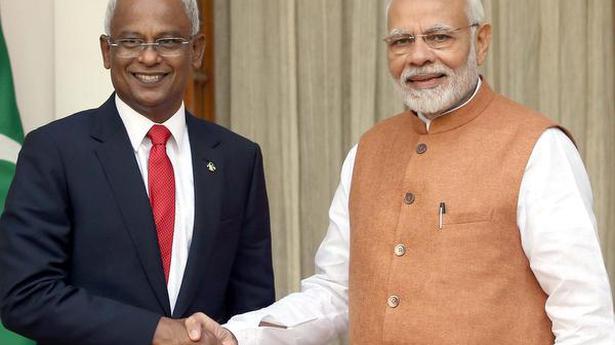 In his first visit abroad since being re-elected to office, Prime Minister Narendra Modi will travel to the Maldives on June 7 and 8 and address the Parliament, according to authorities in Male.

On Wednesday, the Maldivian Parliament or People’s Majlis — in its first session since newly-elected legislators assumed charge — voted to invite Mr. Modi to address the House. Foreign Minister Abdulla Shahid said in a tweet: “#Maldives Parliament has unanimously passed a resolution to invite PM @narendramodi to address a sitting of the house during his upcoming visit to the Maldives.”

“The PM is due to visit the Maldives after receiving a fresh mandate from the people of India. It will be a tremendous honour to welcome him,” former President and newly-elected Speaker Mohamed Nasheed told The Hindu from Male. “In the House today, all MPs pointed out that close cooperation between India and the Maldives is in the interests of both countries, and helps bring stability to the Indian Ocean region,” he said.

President Solih visited New Delhi in December last year, in his first state visit after being elected to the office. Backed by an eclectic coalition, Mr. Solih rose to power after ousting incumbent Abdulla Yameen in a landmark election. For the people of the Maldives, Mr. Solih’s election renewed hopes of opening up democratic space in the country, after years of his predecessor’s widely-criticised slant towards authoritarianism. For New Delhi, the regime change meant a reset in ties that had soured during Mr. Yameen’s term, amid India’s well-known concern over his administration’s growing proximity with China.

Multiple high-level visits since — including by Foreign Ministers from both sides — reflected the significant shift in diplomatic relations between the neighbours. During External Affairs Minister Sushma Swaraj’s visit to the Maldives in March this year, the neighbours agreed to ease their visa regimes and signed Memorandums of Understanding, with India pledging grant assistance for “High Impact Community Development Projects” and collaboration on energy efficiency and renewable energy.

Mr. Modi’s visit in June is expected to further strengthen ties, in addition to reaffirming his neighbourhood-first policy. On the cards are possible collaborations on health and a Mutual Legal Assistance Treaty, a Male-based official source told The Hindu.

The last Indian Prime Minister to address the Majlis was Manmohan Singh when he visited the island nation 2011. He held bilateral discussions with then President Mr. Nasheed, but his four-day visit assumed significance for more reasons than the high-level engagement with Male. Mr. Singh attended the SAARC summit then and also held talks with his Pakistani counterpart Yousuf Raza Gilani.

Iran says prisoner swap offer only for the U.S. not the U.K.

U.N. Secretary-General Antonio Guterres has urged the world to “stamp out anti-Semitism, anti-Muslim hatred, the persecution of Christians and other religious groups” on the first international day to remember people targeted for their religion and beliefs. Mr. Gueterres said that “Jews have been murdered in synagogues, their gravestones defaced with swastikas; Muslims gunned down in […]