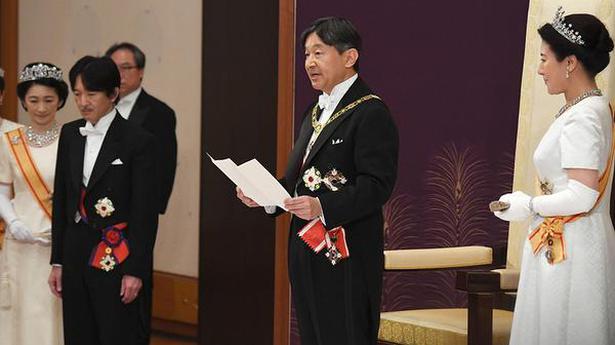 Japanese Emperor Naruhito formally took up his post on Wednesday a day after the abdication of his father, saying he felt a “sense of solemnity” but pledging to work as a symbol of the nation and the unity of its people.

Ex-Emperor Akihito and Empress Michiko stepped down after three decades in their roles on Tuesday in a brief and simple ceremony, with Akihito thanking the people of Japan and saying he prayed for peace.

Emperor Naruhito, 59, technically succeeded his father just as Tuesday became Wednesday but his ascension to the Chrysanthemum Throne was formalised in a mid-morning ceremony, the first part of which his wife and other royal women could not attend. Naruhito, the first Emperor born after the Second World War and the first to be raised solely by his parents, expressed gratitude for their work and said he felt solemn at the thought of the burden he is taking on.

“I pledge that I will always think of the people, and while drawing close to them, fulfill my duties as a symbol of the Japanese state and the unity of the Japanese people in accordance with the Constitution,” Emperor Naruhito, wearing a tailcoat and several large medals, said with a small smile.

“I sincerely hope for the happiness of the people and further progress of the country, and for world peace,” he said in the Imperial Palace’s “Matsu no Ma,” or Hall of Pine. In the first stage of the ceremony, imperial chamberlains carried state and privy seals into the hall along with two of Japan’s “Three Sacred Treasures” — a sword and a jewel — which together with a mirror are symbols of the throne.

Emperor Naruhito was flanked by his brother and heir, Crown Prince Akishino, during the ceremony, which lasted about five minutes.

His wife, Empress Masako, was not in the room in accordance with custom barring women royals, but for the first time a woman did watch — Satsuki Katayama, who was taking part as a member of Prime Minister Shinzo Abe’s Cabinet.

Given the backgrounds of Emperor Naruhito and his wife, Ms. Masako, 55, a former diplomat — which include extended experience studying and living overseas — hopes are high they may be more international in their outlook and closer to the lives of many Japanese.

At least five people were killed and 40 others sustained injuries in a suicide bombing at a wedding ceremony in the eastern province of Nangarhar on Friday. The death toll is expected to rise, reported Tolo News. The provincial government has said that the bombing was carried out by a minor. Further details are awaited. […]

Chinese state TV is reporting that an earthquake in the country’s southwest has killed one person and injured another 29. The government’s earthquake monitoring center says the 5.4-magnitude quake struck the city of Neijiang in Sichuan province early Sunday. The causalities were reported by China Central Television, which gave no other details of the death […]

Thousands of people were expected to come together for an emotional Friday prayer service led by the imam of one of the two New Zealand mosques where 50 worshippers were killed in a white supremacist attack. Six funerals took place on March 21, including for a teenager, a youth soccer coach and a Muslim convert […]