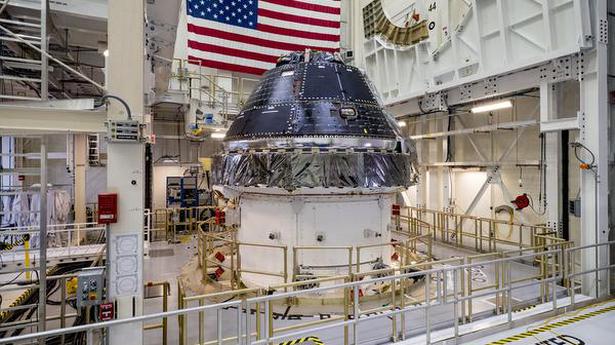 NASA on September 23 earmarked almost $3 billion to American aerospace and defence company, Lockheed Martin to build three Orion capsules, to allow U.S. astronauts to return to the moon by 2024.

The megadeal calls for a first phase including three capsules for $2.7 billion, for Artemis missions III to V — to take astronauts back to the moon. Each capsule can carry four astronauts.

The space agency plans to order three more capsules during fiscal year 2022 for missions VI to VIII, for a total of $1.9 billion, said a NASA statement. Six other capsules can be ordered later.

“This contract secures Orion production through the next decade, demonstrating NASA’s commitment to establishing a sustainable presence at the Moon to bring back new knowledge and prepare for sending astronauts to Mars,” said NASA Administrator Jim Bridenstine.

The Orion capsule must be able to bring astronauts to the Moon and back, and it must also be capable of travelling to Mars and beyond.

“Orion is a highly capable, state-of-the-art spacecraft, designed specifically for deep space missions with astronauts, and an integral part of NASA’s infrastructure for Artemis missions and future exploration of the solar system,” Bridenstine added.

NASA believes that ordering in groups of three capsules — up to a dozen are now envisaged — should help it save money. The service module — the part of the ship that has the main elements to keep astronauts alive during their flight — is the responsibility of the European Space Agency.

Orion capsules must also be reusable at least once.

In addition to the capsule that will orbit around the Moon attached to a mini-station (the Gateway), NASA asked the aerospace sector at the end of July to propose detailed vehicle projects to land two astronauts on the Moon by 2024, including the first woman.

Sri Lanka to conduct advance polling for people under quarantine

This will be the first ever election in Sri Lanka to have an advance polling date other than the postal voting for persons on election duties Source: thehindu.com Related

The German citizen is alleged to have travelled to Syria in September or October of 2014 to join the IS Source: thehindu.com Related

Flying into the uninhabited Northwestern Hawaiian Islands, Midway Atoll appears out of the vast blue Pacific as a tiny oasis of coral-fringed land with pristine white sand beaches that are teeming with life. But on the ground, there’s a different scene- plastic, pollution and death. With virtually no predators, Midway is a haven for many […]