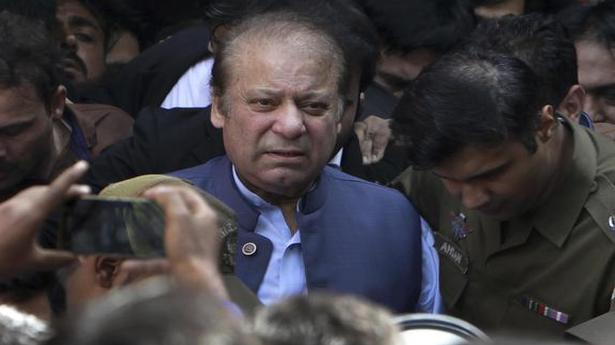 Uncertainty prevailed over Pakistan’s ailing former prime minister Nawaz Sharif’s travel to London on November 10 for treatment due to the government’s failure to remove his name from the no-fly list.

The 69-year-old Pakistan Muslim League-Nawaz (PML-N) supremo agreed on November 8 to go to the U.K. for the treatment, heeding doctors’ advice and accepting his family’s request. He was scheduled to leave for London on a PIA flight on November 10, in the morning.

“The government could not remove Mr. Sharif’s name from the no fly-list (Exist Control List-ECL) as the National Accountability Bureau chairman was not available to issue no objection certificate in this case,” a government official told PTI.

He said the officials of the National Accountability Bureau have also sought Sharif’s medical reports.

The official said that as a special case, the government may remove his name from ECL enabling Sharif to catch his flight at 9 a.m. on November 10, otherwise this matter will be taken up on November 11.

Earlier, a senior PML-N leader told PTI that Nawaz Sharif is leaving for London on a PIA flight on Sunday morning along with his brother Shahbaz Sharif for treatment.

“Although his name is still on the no fly-list but the Imran Khan government has assured us that it will be removed today evening,” the leader said.

The PML-N leader chided Prime Minister Imran Khan for backing out of its commitment in which he said that he had no objection on Sharif’s travel abroad for treatment.

Special Assistant to PM Firdous Ashiq Awan said Sharif was seriously ill and Khan had clear intention that politics and health issues should be considered separately.

PM Khan is of the view that all legal formalities must be addressed in the case of Mr Sharif, she said.

Sharif is going to London after doctors categorically told him that they had exhausted all options available in Pakistan and seeking treatment abroad was the only one option left.

The three-time premier has already secured bail in Al-Azizia Mills corruption case for eight weeks on medical grounds and in the money laundering case. In Al-Azizia case, Sharif was serving a seven-year imprisonment in Lahore’s Kot Lakhpat jail.

His daughter Maryam Nawaz will not accompany him as she had to surrender her passport to the Lahore High Court as a surety against the bail granted to her in the money laundering case. She may explore the option of going to London later, the PML-N lader said.

According to him, Sharif’s sons — Hasan and Hussain — and another daughter Asma, who live in London, will look after him.

“As his platelet count should be 50,000 and beyond for travel abroad, the doctors may give him high dose to increase his platelets, enabling him to undertake the travel,” he added.

The Pakistan government decided to let Sharif go abroad for treatment due to his critical medical conditions.

Earlier, Maryam said, Mian sahib’s condition is very critical and he must go abroad for diagnosis of his disease and treatment. Doctors of the government and private medical boards have exhausted all options and they have unanimously recommended his treatment abroad.”

From ‘mediation’ to ‘help’: Trump’s public utterances on J&K

U.S. President Donald Trump earlier this month once again brought up the Jammu and Kashmir (J&K) issue, offering ‘help’ to India and Pakistan. “I get along with both countries very well. I am willing to help them if they want, they know that is out there,” he told reporters. This marked a departure from Mr. […]

Prime Minister Narendra Modi was greeted by the sights, sounds and dresses of a “Mini India” as part of a grand welcome ceremony organised by the State unit of the JP here on Saturday evening. Party workers in the thousands, mobilised from across the Capital and showcasing the cultural heritage of their respective States, began […]

Gunmen attacked a ceremony in Kabul on Friday, killing at least 27 people in the first major attack on the Afghan capital since the United States reached an agreement with the Taliban to withdraw U.S. troops. The Taliban, the largest Islamist militant group in Afghanistan, said in a statement they were not involved in the […]