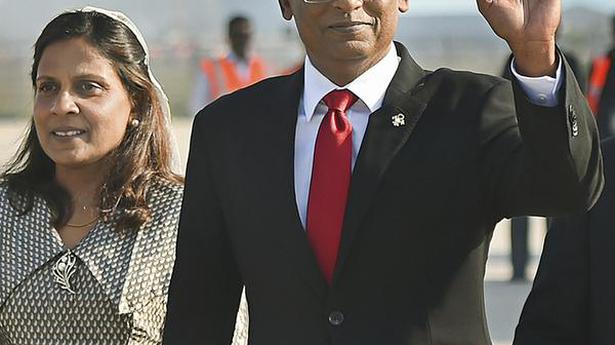 The Election Commission extended polling time by two hours to accommodate more voters who were in queue braving the heat, its officials said. Counting began around 6.30 p.m. and provisional results are likely to be known by early Sunday.

Over 2,00,000 Maldivians voted across the island nation and in polling stations abroad, in Sri Lanka, India, Malaysia and the U.K. Saturday’s polls, to elect representatives to 87 seats in the legislature, came around six months after Maldivians voted for change. In September 2018, they elected Ibrahim Mohamed Solih to power, dislodging former President Abdulla Yameen, whose regime was accused of corruption and repression.

President Solih, who was then backed by a coalition of diverse parties led by his Maldivian Democratic Party (MDP), will need a parliamentary majority to implement initiatives he promised as part of his reform agenda. The MDP decided to go it alone this election and is hoping to garner the numbers in the legislature, even as differences have begun to emerge within the coalition.

“I just want someone good to represent me, my concerns in Parliament. I’m not from Male, I’m from an atoll. We need basic infrastructure there,” said Aminath Fauza, 18, a first-time voter. She was echoing what appeared a common concern among many Maldivians — the gap in development between capital Male and other atolls.

If Ms. Fauza’s concern was development, senior citizen Abdulla Mooza, who was in a nearby queue waiting to vote, had other pressing concerns. “I have to find out what happened to my son. The opening we have now might be the only chance for me to do that and bring the perpetrators to justice,” he said, referring to dissident journalist Ahmed Rilwan, who went missing in August 2014.

“Already some are trying to block investigations, so we need the MDP to have a majority to go ahead,” Mr. Mooza said, pointing to Speaker Gasim Ibrahim’s refusal to call a vote on a Bill granting legal powers to presidential commissions formed to recover stolen assets and investigate unresolved murders.

Others like Mariyam Leen, 20, have few expectations and little hope. “I don’t want anything from any of our politicians. Because none of them is going to do anything anyway. I still vote, it is my right,” she said.

British police have charged a man with criminal damage after a painting, reported by the BBC to have been by Spanish master Pablo Picasso, was attacked at a London gallery over the weekend. The incident happened on Saturday at the Tate Modern gallery when Picasso’s 1944 painting “Bust of a Woman”, worth some 20 million […]

The United Nations General Assembly (UNGA) will hold a “virtual” briefing for member states to discuss challenges posed by the Covid-19 pandemic, starting at 7.30 pm IST on March 27. On Tuesday, UNGA president Tijjani Muhammad-Bande said in a letter to all member states that the virtual briefing would be held “due to the unprecedented […]

China on Monday declared an immediate and “comprehensive” ban on the trade and consumption of wild animals, a practice believed responsible for the deadly coronavirus outbreak. The Standing Committee of the National People’s Congress (NPC), the country’s top legislative panel, approved a proposal “prohibiting the illegal wildlife trade, abolishing the bad habit of overconsumption of […]