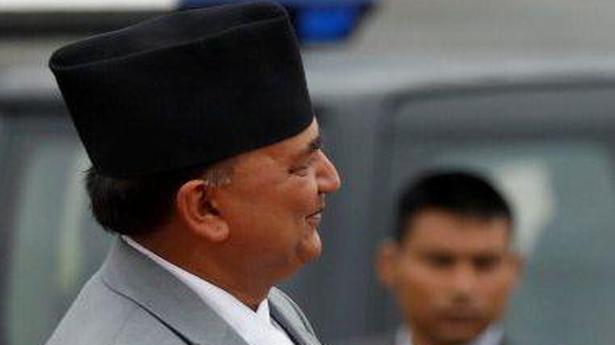 Nepal-China train connectivity is expected to get priority during the coming visit of President Xi Jinping, Nepal’s Defence Minister Ishwor Pokhrel said on Wednesday. The senior Minister described the scheduled October 12-13 visit as “historic” and said both sides would take up issues such as infrastructure and connectivity during the official talks.

“Rail connectivity with China is a burning issue before the Nepali citizens. It’s a topic that both sides are expected to discuss when President Xi arrives here on October 12. The project has several aspects that require detailed top level negotiations,” said Mr. Pokhrel speaking to The Hindu over telephone regarding the Kathmandu-Kyirong rail connectivity that will open Nepal to Chinese trains across the Himalayas.

The rail connectivity between Kathmandu and Kyirong in Tibet has acquired greater significance since the blockade of 2015-16. The economic blockade that froze the movement of goods from India to Nepal had strengthened the arguments in favour of securing an alternative connectivity option for Kathmandu. The trans-Himalayan project is estimated at $2.75 billion and is considered to be one of the most ambitious infrastructure plans ever undertaken by the Chinese government.

The Minister said the visit was an honour for the people of Nepal as this was the first official visit by a Chinese President after nearly two and half decades. Mr. Xi will arrive in Kathmandu for an overnight visit on October 12, the Ministry of Foreign Affairs of Nepal announced on Wednesday morning. The visit will commence after completion of Mr. Xi’s India visit.

A press release issued by the Ministry said that during the visit, Mr. Xi would hold delegation-level talks with Nepal Prime Minister K. P. Sharma Oli following which bilateral agreements and MoUs would be signed. The visiting President would leave Nepal on October 13.

The rail connectivity between Nepal and China has been in discussion since Pushpa Kamal Dahal “Prachanda” visited Beijing as Nepal’s Prime Minister in 2008. The issue had also come up during Mr. Oli’s latest visit to Beijing.

Apart from the railways, both sides are also expected to evaluate hydropower projects and several internal infrastructure projects. Nepal’s 5G network is expected to come up for discussion as well when Mr. Xi meets Nepali leaders.

Nepal President Bidhya Devi Bhandari will host a banquet in honour of the visiting Chinese leader on October 12 evening.

Pakistan on Wednesday announced that it would not allow the use of its airspace for Prime Minister Narendra Modi’s flight to Germany. The official Twitter account of the Government of Pakistan (@pid_gov) shared a short video of Foreign Minister Shah Mahmood Qureshi making this announcement.   “India had sent in a request to us that […]