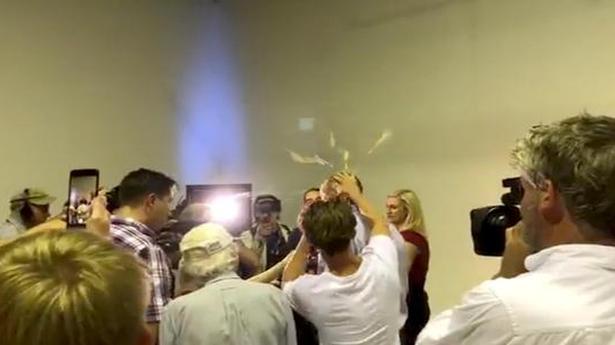 Australian police said they were investigating after a teenager smashed an egg on a controversial right-wing lawmaker who had blamed New Zealand’s mass mosque shootings on the country’s immigration programme.

The footage, shared widely on social media, showed Senator Fraser Anning being approached from behind at a political event on Saturday, before having an egg cracked on the back of his head.

The footage showed Anning appearing to try to hit the person, before that person was dragged to the ground.

Victoria Police released a statement saying the incident was being investigated “in its entirety” and that it involved a 17-year-old boy.

Controversial Independent Senator Fraser Anning has been caught on camera punching a young protester after the boy cracked an egg on the back of his head at an event in Moorabbin. A 17-year-old boy was arrested and released without charge pending investigation. #auspol #7News pic.twitter.com/lbXLDwfS96

Anning has received widespread condemnation following comments he made that saying cause of New Zealand’s worst peace time shooting was letting “Muslim fanatics” migrate to the country.

“(Anning’s) conflation of this horrendous terrorist attack with issues of immigration, in his attack on Islamic faith specifically, these comments are appalling and they’re ugly and they have no place in Australia,” Australia’s Prime Minister Morrison told journalists on Saturday.

A GoFundMe campaign had raised more than A$19,000 ($13,500) for the teenager to cover the cost of legal fees and so he could “buy more eggs” by Sunday and the hashtag #EggBoy was trending on Twitter.

Meanwhile, Australia’s immigration minister announced on Saturday that controversial conservative speaker Milo Yiannopoulos would not be allowed to enter Australia following Yiannopoulos describing Islam as a barbaric and alien religion.

“Mr Yiannopoulos comments on social media regarding the Christchurch terror attack are appalling and foment hatred and division,” immigration minister David Coleman said in a statement.

Australian Brenton Harrison Tarrant, 28, a suspected white supremacist, was charged with murder on Saturday after 49 people were killed and dozens wounded in mass shootings at two New Zealand mosques.

This settlement is the culmination of several years of hard work by survivors. Source: thehindu.com Related

Dozens of Hong Kong protesters escaped a two-day police siege on a campus late on Monday by shimmying down a rope from a bridge to awaiting motorbikes in a dramatic and perilous breakout that followed a renewed warning by Beijing of a possible intervention to end the crisis engulfing the city. Clashes rumbled throughout the […]

Governors in US states hardest hit by the novel coronavirus sparred with President Donald Trump over his claims they have enough tests and should quickly reopen their economies as more protests are planned over the extension of stay-at-home orders. New York continued to see hospitalizations decline to 16,000 from a high of 18,000, and the […]