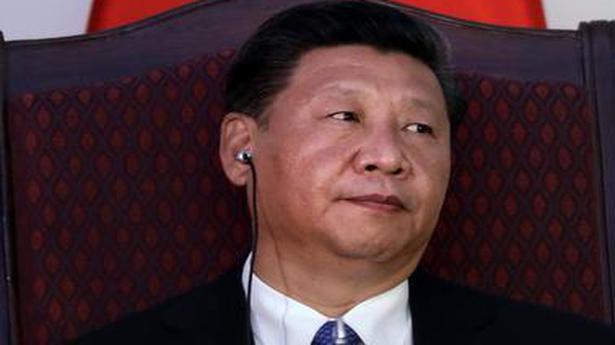 Chinese President Xi Jinping is heading to Chennai on Friday with a clear message — Beijing wants to develop a 360-degree relationship with India.

But if the strategic calculus of the two neighbours, where the U.S. is the elephant in the room, does not align, then Beijing also has a plan-B.

Analysts say that if India continues to develop a security dimension to its Indo-Pacific strategy, through the weaponisation of the India-U.S.-Japan-Australia Quad, then Beijing’s strategic ties with Pakistan, a common neighbour to both countries, are likely to further consolidate.

Ahead of Mr. Xi’s departure, China, which views the formation of the Quad as an instrument to contain Beijing, has taken umbrage at the decision of the four countries to raise the level of their consultations to the Foreign Minister level in New York, on the sidelines of last month’s UN General Assembly session, official sources said.

President Xi’s bagful of pre-departure messages can be traced to the Bishkek summit of the Shanghai Cooperation Organisation (SCO) in June. The Hindu has learnt that the Chinese side had offered its good offices to resolve the Kashmir issue between India and Pakistan, which New Delhi politely declined. Earlier in March, Foreign Minister Wang had publicly offered to mediate to resolve Indo-Pak differences.

The intensity of China’s intent to help resolve the Indo-Pak row may have diminished, but not extinguished. The reasons for China’s persistence to see peace break out between New Delhi and Islamabad is fairly obvious. With a breakthrough in Kashmir, India will no longer have an argument to reject the China-Pakistan Economic Corridor (CPEC), the flagship of President Xi’s Belt and Road Initiative (BRI).

A quadrilateral cooperative relationship among India, China and Pakistan, with the likely participation of Russia, will also significantly boost the global profile of the SCO, which is at the heart of the revival of Eurasia as a salient geopolitical and geo-economic construct.

Chinese officials, who did not wish to named, have told The Hindu that in the backdrop of the post August 5 situation, Beijing would support a track-2 dialogue among China, India and Pakistan to address each other’s concerns.

Analysts point out that the Chinese side, which wanted to “hear out” Pakistan’s views on Kashmir and other issues, including Afghanistan and CPEC, had virtually “summoned” both the civilian and military components of the establishment in Islamabad, before Mr. Xi left for India to break bread with Prime Minister Modi. “It was his (President Xi’s) desire and ours to take each other into confidence (prior to the informal summit with Mr. Modi),” Pakistan’s Foreign Minister Shah Mahmoud Qureshi has been quoted as saying.

Apart from Prime Minister Imran Khan and Army Chief Qamar Javed Bajwa, the Director General of Pakistan’s Inter-Services Intelligence (ISI), Lt. Gen. Faiz Hameed, was also present in the Pakistani delegation, signalling that apart from Kashmir, the Afghanistan situation, over which the ISI maintains a tight grip, was also prominently on the agenda during talks in Beijing.

An official, who did not wish to be quoted, said, “talks with Mr. Xi prior to his India meetings have been symbolically important as they have been viewed in Islamabad as a special gesture reinforcing Beijing’s special ties with Pakistan”. He also pointed out that the high profile civil-military meetings also signal that India’s growing ties with the Indo-Pacific Quad had now firmly entered the China-Pakistan equation.

The United States sent Navy and Coast Guard ships pass through the Taiwan Strait on Sunday, the military said, as the United States increases the frequency of movement through the strategic waterway despite opposition from China. The voyage risks further raising tensions with China but will likely be viewed by self-ruled Taiwan as a sign […]

France to impose green tax on plane tickets from 2020

The French government is to impose a tax of up to €18 on plane tickets for all flights from airports in France to fund less-polluting transportation projects, a Minister said on Tuesday. The move, which will take effect from 2020, will see a tax of €1.5 imposed on economy-class tickets on internal flights and those […]

Cousin pleads to Syrian President to save firm