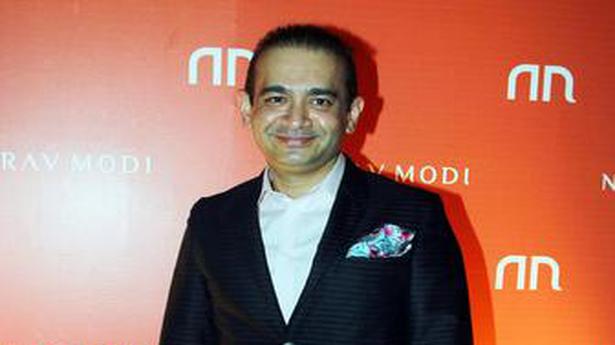 Fugitive billionaire jeweller Nirav Modi was arrested on behalf of Indian authorities on Tuesday afternoon in London and produced on Wednesday before a Westminster Magistrates Court judge, who denied bail to him.

Mr. Modi will stay in jail till the next hearing on March 29.

Mr. Modi was arrested by officers from the Met Police’s extradition unit and would remain in custody until the hearing at which the granting of bail would be determined.

The case will then follow a similar pattern through the U.K. courts as that of liquor baron Vijay Mallya, who remains on bail since his arrest on an extradition warrant in April 2017 on ₹9,000 crore fraud and money laundering charges. The 63-year-old businessman has since filed an application seeking leave to appeal against his extradition ordered by Mr. Javid last month. Mr. Mallya’s case is in final stages.

Mr. Modi was tracked down and filmed by the Daily Telegraph earlier this month near a luxury apartment complex by Oxford Street, where he has been living. He declined to answer questions about his status in the U.K. and reports that he had applied for asylum.

The paper also reported that he had been given a National Insurance number by Britain’s Department for Work and Pensions, which is used by the British government for putting together a person’s work, social security and tax details, and issued to people with the ability to work in the country.

Last June, the Interpol issued a Red Notice against Mr. Modi and two others on the Enforcement Directorate’s request. India received confirmation from the Crown Prosecution Service that it would be possible to launch proceedings against him even without official confirmation of his exact location.

In August last, Indian authorities handed over an extradition request for Mr. Modi to the U.K. authorities even as his location remained unknown.

After decades during which India secured just one extradition, the past year has been a successful one with Mr. Javid signing two extradition orders — Mr. Mallya’s and Sanjeev Chawla, who is wanted in connection with a match-fixing scam.

No one is above our rules: Twitter denies allegations of bias for suspending pro-Kashmir Pakistani accounts

Twitter, which suspended about 200 accounts of Pakistanis posting about the Kashmir issue, has denied allegations of bias by Islamabad, saying that it enforced policies judiciously and ensured impartiality of all users. Pakistani government on Monday complained to Twitter about 200 accounts that have been suspended for posting about the Kashmir issue. Over the last […]