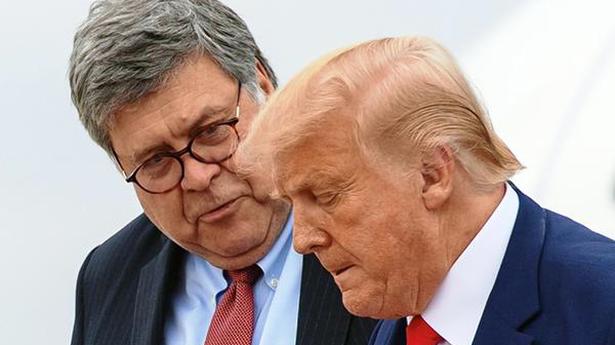 The U.S. Attorney General rejected Republican claims of significant voter fraud in the presidential election on Tuesday, adding to the pressure on President Donald Trump to give up his quixotic effort to overturn Joe Biden’s clear victory.

William Barr’s comments confirmed the conclusions of the Department of Homeland Security, U.S. intelligence and independent poll watchers that the 2020 election was, in the language of government officials, the “most secure in American history.”

“To date, we have not seen fraud on a scale that could have effected a different outcome in the election,” he told the Associated Press.

Mr. Barr’s interview came as Mr. Trump persisted in claiming, without evidence, that fraudulent voting practices and systems in key states such as Michigan, Pennsylvania and Georgia had robbed him of a second term.

In tweets on Tuesday afternoon, Mr. Trump highlighted testimony being offered in a public hearing on the election in Michigan, which has already certified Mr. Biden’s win in the State, and a separate Republican-organised event in Virginia.

“People are coming forward like never before. Large truck carrying hundreds of thousands of fraudulent (FAKE) ballots to a voting center? TERRIBLE – SAVE AMERICA!” he wrote.

In several legal filings — all rejected by the courts — the Trump campaign has sought to invalidate millions of votes for Mr. Biden based on claims that lacked any evidence.

The campaign to challenge the results has led to rising unease within the Republican party, including an emotional rebuke directed at Mr. Trump from the man in charge of Georgia’s voting systems.

Separately on Tuesday, staunch Trump supporter and Senate Majority Leader Mitch McConnell gave his clearest acknowledgment yet that Mr. Biden would move into the White House next month.

Discussing stalled negotiations over a stimulus package to jump-start the virus-battered US economy, McConnell said: “There’s likely to be a discussion about some additional package of some size depending on what the new administration wants to pursue.”

Mr. Barr, an ally of Mr. Trump, didn’t address specific claims, but dismissed the idea of any “systemic” fraud that would have changed the outcome of the vote.

Any problem for which there has been evidence, Mr. Barr noted, would impact an insignificant number of votes.

“There’s been one assertion that would be systemic fraud, and that would be the claim that machines were programmed essentially to skew the election results,” he told the AP. “So far, we haven’t seen anything to substantiate that,” he added.

There was no immediate reaction to Mr. Barr from Mr. Trump. But in a joint statement, Mr. Trump’s attorney Giuliani and Jenna Ellis, a senior legal advisor to the outgoing President’s campaign, dismissed the remarks.

“With all due respect to the attorney general, there hasn’t been any semblance of a Department of Justice investigation,” they said.

“We have gathered ample evidence of illegal voting in at least six States, which they have not examined.”

Recent news reports have said that Mr. Trump is unhappy with Barr for not making efforts to support the President’s reelection.

The United States is expected to announce on Monday that all importers of Iranian oil will have to end their imports shortly or be subject to U.S. sanctions, a source familiar with the situation told Reuters. The source confirmed a report by a Washington Post columnist that the administration will terminate the sanctions waivers it […]

He was accused of ‘insulting Prophet’ Source: thehindu.com Related