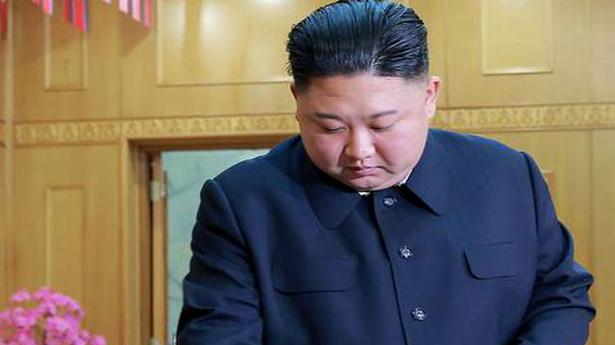 North Koreans went to the polls Sunday for an election in which there could be only one winner.

Leader Kim Jong-un’s ruling Workers’ Party has an iron grip on the Democratic People’s Republic of Korea. Every five years, it holds an election for the rubber stamp legislature, known as the Supreme People’s Assembly. The exercise has all the trappings of votes elsewhere, from electoral rolls to sealed ballot boxes to scrutineers for the count.

But in keeping with one of Pyongyang’s most enduring slogans — “single-minded unity” — there is only one approved name on each of the red voting slips.

With portraits of the leader’s father Kim Jong-il and grandfather Kim Il-sung looking down on every ballot box, voters lined up to drop their slips inside.

There is a pencil in the panelled voting booths for anyone who might wish to register dissent by crossing out a candidate’s name. But no one does. By 6 p.m., the official KCNA news agency reported, all electors in all constituencies had voted, “except for those abroad or working in oceans”.

Turnout in 2014 was 99.97% and the vote was 100% in favour of the named candidates, a result unmatched anywhere else in the world. “Our society is one in which the people are gathered around the respected Supreme Leader with a single mind,” election official Ko Kyong Hak said, outside a polling station at the 3.26 Pyongyang Cable Factory.

Participation in the election was a citizen’s obligation, he said, “and there are no people who reject a candidate”. An editorial in the Rodong Sinmun, the mouthpiece of the ruling party, reinforced the message.

Voters “should cast approval ballots with their loyalty to the party and the leader, absolute support to the DPRK government and the will to share their destiny with socialism to the last”, it said.

China calls on U.S. to pay its debts to the United Nations

‘As of May 14, the total unpaid assessments under the U.N. regular budget and peacekeeping budget amount to 1.63 billion and 2.14 billion U.S. dollars respectively,’ the Chinese statement said Source: thehindu.com Related

Fed up with status quo, Ukrainians may elect comedian in presidential run-off

Ukrainians vote on Sunday in the second round of an election that could thrust a comedian with no prior political experience into the presidency of a country at war and wanting transformational change. Volodymyr Zelenskiy, who plays a fictitious president in a popular TV series, has led opinion polls against the incumbent Petro Poroshenko, whose […]

The body of a 28-year-old Indian construction worker, who died in a crane collapse accident here on Monday, is being flown back to Tamil Nadu where his wife, pregnant with their first child, and parents await. An online crowdfunding campaign has been opened till November 14, which, as of Wednesday night, has collected SGD 57,000 […]