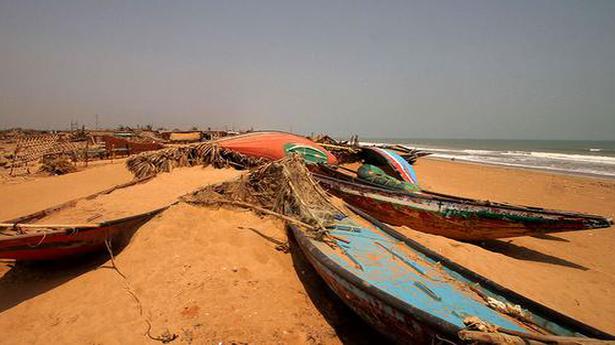 The traditional fishermen of Odisha are in a fix as they have lost their boats and nets in cyclone Fani and face the diminished scope of professional employment in other coastal States during the summer months.

According to Prasanna Behera, president of the Odisha Traditional Fish Workers’ Union (OTFWU), a large number of the cyclone-devastated fishermen may be forced to become menial migrant labourers during the next two months. The Phailin cyclone of 2013 that had its landfall near Gopalpur in Ganjam district had led to large scale migration of fishermen looking for work outside the State. But Phailin occurred in October, when the scope of employment in the marine fishery sector was high in other coastal States.

During the summer months fishing activity is low in States of the eastern coast, which will reduce the employment scope for Odisha fishermen, said Mr. Behera. It is expected that some of them may migrate to the western coast looking for fishing sector jobs in Maharashtra, Gujarat, and Goa. Others may be compelled to earn a living as menial workers in other sectors.

According to initial government assessment, 6,389 traditional marine fishing boats, 7,240 nets, 2,524 fish ponds of area 587 hectare, three fishing harbours, six fish landing centres, and five fish farms have been damaged by Fani in Odisha. According to OTFWU, the number of damaged boats and nets will be higher as information is yet to reach it from several areas.

Fani has affected the traditional fishermen of Puri, Jagatsinghpur, Kendrapara districts and those living on the banks of Chilika lake in Khurda, Ganjam and Puri districts. The demand for marine fish, prawn and crab has again started to rise in the Odisha markets. But the fishermen of Ganjam, who were least affected by Fani are not able to gain from it.

According to N.Taleya, a fisherman community leader of Nulia Nuagaon in Ganjam district, the ban on mechanised fishing from April 15 to May 31 for the breeding season still continues in Ganjam coast. Due to this they are only able to fish with their traditional catamarans. The catch is not sufficient to get good income, although demand is high as fishing is almost nil in the Fani-devastated coastal districts.

With fall in fish catch, women of the marine fisherman community have also lost their livelihood. They are no more able to process and trade marine products. Samudram, a federation of Women Self Help Groups, is doubtful about producing 500 kg of processed marine products per month in the coming days. There was a time when it was producing 3,000kg of produce every month. As cashew jungles have been destroyed, these fisherwomen have also lost the income they were getting from cashew plucking.

Only community-based measures through organisations such as Samudram and WSHGs can provide some respite to the devastated traditional fishermen of Odisha coast, said W. Babaji, a marine fisherman community leader.

Russian scientists tracking migrating eagles were forced to start a crowdfunding campaign after their birds wandered into Iran and foreign text messages from their tracking devices depleted the project’s budget. Scientists rang the alarm earlier this month when several endangered steppe eagles transmitting coordinates via Russian mobile numbers wandered into the roaming zone after spending […]

House Democrats unveiled plans on Tuesday to open up the impeachment inquiry into President Donald Trump with public hearings, after criticism from Republicans that the process has been overly secretive. The White House responded that it still considers the proceedings a “scam,” signalling no let-up in Mr. Trump’s strategy of trying to prevent the investigation […]

Bill and Melinda Gates aren’t backing down from honouring Prime Minister Narendra Modi despite concerns about the Kashmir region. A dozen people, some wearing “Free Kashmir” T-shirts, with the Justice For All coalition delivered 100,000 petition signatures to the Gates Foundation’s Seattle headquarters on Monday, asking the world’s largest private nonprofit not to honor Modi’s […]