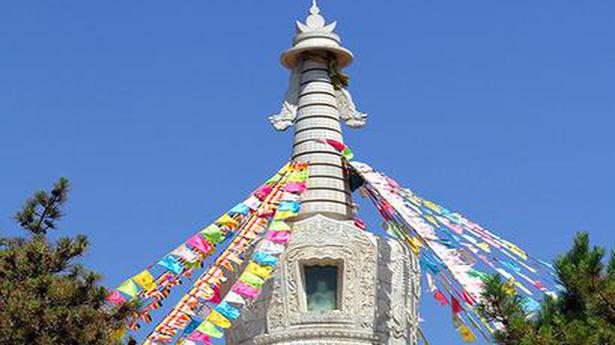 Set amid a concrete jungle, bright lights, and free flowing traffic, Beijing West Station, at night, is usually crammed with passengers. At the gates, travellers queue up, and after the customary frisking and baggage screening, they head into the main corridor, leading into departure gates. From there, platforms and trains can be conveniently accessed.

Prior to boarding, many crowd around giant screens, looking for their train number and boarding gate. Others head to a row of restaurants, for a quick uptake of noodle soup, steam dumplings or other local fare. The presence of Starbucks, Pizza Hut, McDonalds and KFC — offering fast food tweaked to local tastes — is now routine at most railway stations and domestic airports in China. But there are not many takers for a late evening western snack. Instead, the lure of a wholesome Chinese meal is compelling.

The 10.17 p.m. train to Hohhot — the K89 — is popular among travellers, wishing to arrive in the capital of Inner Mongolia the next morning, without wasting daylight hours in transit. A good night’s rest is assured as all compartments are clean, and corridors in the “soft sleeper” category are fully carpeted — blue with a golden stripe at the edges. The cubicles can sleep four, and all berths are provisioned with clean white sheets, blankets and pillows.

By daybreak the train has already steamed into Inner Mongolia, its vast sunlit grasslands seen from a moving train, presenting a stunning early morning sight.

Apart from splendid scenery in its peripheral areas, Hohhot has a deep spiritual side to it — its evolution is steeped in the tradition of Tibetan Buddhism. The city traces its origins to the Da Zhao Buddhist monastery. The iconic structure was built in 1557 by Tumed Mongol leader Altan Khan. The monastery is said to be the first building in Hohhot, becoming the core around which the city spread its wings.

Da Zhao temple brought fame to the city as it became part of the Buddhist universe following the visit here by the 16th century visit by the third Dalai Lama. Sonam Gyatso consecrated the 10 foot silver Sakyamuni Buddhist statue during his visit, making the temple a seat of worship for Buddhists all over Mongolia.

“Upon meeting Altan Khan, Sonam Gyatoso agreed to enter into a “patron-priest” relationship…For Altan, patronage of the growing Geluk tradition was a way to recreate his forebears’ influence in Tibet; for Sonam Gyatso, the opportunity for Mongol support for his missionary work both inside and outside of Tibet…was extremely attractive,” says the website, The Buddhist Review Tricycle.

Hohhot’s stature as a Buddhist religious centre only grew in subsequent years. Not far from the Da Zhao monastery is the famous Five Pagoda temple. Built nearly 160 years later, the temple is built around a Stupa, surmounted by five elegant pagodas. The 1,563 images of Buddha carved into the walls add lustre to its pristine architecture.

The Five Pagoda temple, located in the larger Cideng temple, has a strong Indian connection as well. Local authorities say that its architectural form is based on ancient India’s Putijiaye style.

Against the northern wall, three large stone carvings, with deep meaning, as well as an Indian connect, are perceptible. They represent the wheel of life, or bhāvacakra, symbolising the concept of the cyclic existence.

The growth of Hohhot, brought into the city Muslims, mainly of Hui ethnicity, who continue to flourish, mainly as traders. Near the Grand Mosque, built in 1693, shopkeepers sell rounded breads, enriched with dry fruits and sunflower seeds, as well as other stuffed goodies.

On the side streets, roasted lamb is a staple. Milk tea is also a local favourite. In the bazaar near the Grand Mosque, many shops sell textile, richly embroidered in the Islamic tradition. “If you like anything, we can make it for you and courier it to Beijing. It will reach you in three days,” a local shopkeeper told this correspondent.

Aware of its cultural assets and great scenery, the local government has been making concerted efforts to promote tourism as a major income resource. Around 90 km north from Hohhot, the Xilamuren grasslands are a must-see sight. The area, which is part of the Mongolian-Manchurian steppe, has long daylight hours in summer.

Unsurprisingly, it hosts a giant 3000 MW solar park. The sight of windmills along the rolling hills is also common, taking advantage of the magnificent windswept terrain.

A Sino-U.S. trade war could ease somewhat but wider conflicts between the world’s two largest economies will continue, Lou Jiwei, a former Chinese finance minister, said on Saturday. “Look at the next development, there could be compromises in the trade war at a certain stage, and we have seen signs of compromising,” Mr. Lou, now […]

U.S. President Trump says will be tested for coronavirus daily

A military aide of Mr. Trump, whom officials described as a personal valet, tested positive for coronavirus Source: thehindu.com Related