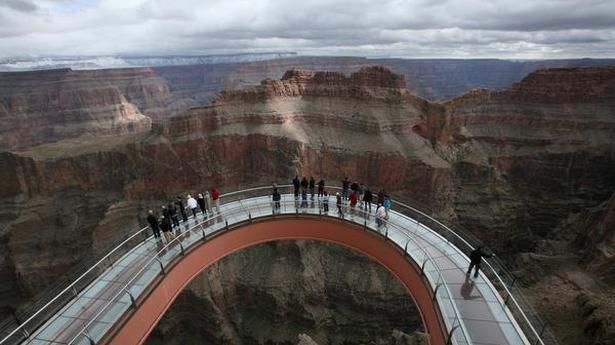 Authorities are trying to locate the body of a man who climbed over a safety barrier at the Grand Canyon Skywalk and apparently jumped to his death.

They say the 28-year-old visitor to the tourist spot on the Hualapai reservation outside Grand Canyon National Park jumped around 4-30 p.m. on September 29.

Skywalk opened in 2007. It’s a horseshoe-shaped glass walkway that just about 70 feet over the canyon overlooking the Colorado River.

A Chinese tourist fell to his death in March when he stumbled while trying to take a photo close to Skywalk.

Activists in El Salvador threw eggs filled with confetti and sprayed red paint outside the attorney general’s office on Monday to a protest a decision to seek a third trial for a woman accused of killing her stillborn son. Abortion is banned in the socially-conservative Central American country, where women have been prosecuted for stillbirths […]

The Lok Sabha on Monday passed the Citizenship Amendment Bill (CAB) that seeks to give citizenship to refugees from the Hindu, Christian, Buddhist, Sikh and Zoroastrian communities fleeing religious persecution from Pakistan, Bangladesh and Afghanistan. The Bill was passed 311-80 with zero abstentions, after the Opposition put up a spirited attack against it. Despite India’s decision to […]

Deaths related to measles, mostly among small children, have more than tripled to 20 in the past week on the Pacific island of Samoa, the government has said eight days after declaring a state of emergency over the outbreak. The island state of just 200,000, located south of the equator and half way between Hawaii […]