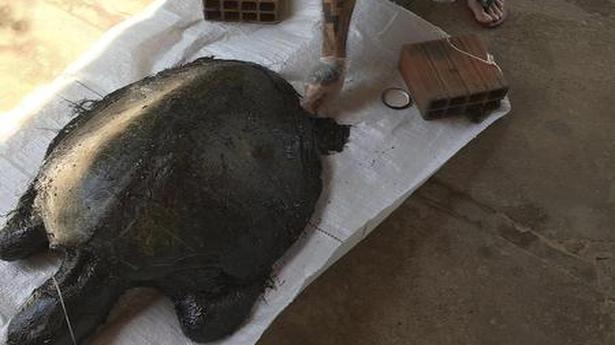 Brazil’s main environmental agency Ibama said Thursday that it has detected 105 crude oil spills from an undetermined source polluting the waters of the country’s northeast coast this month.

The spill spans over 1,500 kilometers of Brazil’s northeast coast, affecting wildlife and polluting some of the postcard beaches in one of the nation’s top touristic destinations, such as Praia do Futuro, in the state of Ceara, and Maragogi, in Alagoas state. Local media showed pictures of sea turtles coated in black tar by the slick.

Some marine turtles were contaminated by the oil. They were rescued alive in the state of Rio Grande do Norte and sent to rehabilitation centers. Other animals were found dead, Ibama said, without disclosing species or numbers.

Brazil’s state-controlled oil company Petroleo Brasileiro SA, also known as Petrobras, said in a statement that even though it was not involved in the spill it was contributing to the clean-up efforts, with some 100 Petrobras employees helping clean the beaches. The company is also investigating the cause and origin of the oil spill.

After concluding the investigation the company said in a statement that after completing a molecular analysis of the oil it was found that the crude spilled was not produced nor sold by the company. It also said that the spills spread across eight states come from a single source but were not produced in the South American nation.

“So far there is no evidence of contamination of fish and crustaceans,” the Brazilian Institute of the Environment and Renewable Natural Resources institute said.

Brazil’s environmental body urged beachgoers and fishermen to avoid the material. It said the situation is stable in the waters of the most affected state, Rio Grande do Norte. Investigators are now concentrating on the Amazon state of Maranhao, close to the border with French Guiana.

Anna Carolina Lobo, a coordinator of the marine program of the WWF conservation group in Brazil, said it is alarming that Brazilian authorities don’t know the origin of the oil spills.

“The surveillance in our waters, no matter if this was an intentional or an unintentional spill, is too fragile for a country this big,” Ms. Lobo said.

“Brazil has few boats and analysts to follow what happens in our waters,” she said.

State support for such surveillance is diminishing further under President Jair Bolsonaro, who took office in January, according to Ms. Lobo.

The FBI was justified in opening its investigation into ties between Donald Trump’s presidential campaign and Russia and did not act with political bias, despite “serious performance failures” up the bureau’s chain of command, the Justice Department’s internal watchdog said in a highly anticipated report Monday. The findings undercut President Donald Trump’s claim that he […]

‘Both India and China have expressed a desire to de-escalate, and we support a peaceful resolution of the current situation,’ says State Department spokesperson Source: thehindu.com Related

“The American people will decide this election. And the United States government is perfectly capable of escorting trespassers out of the White House,” the Biden campaign responded Source: thehindu.com Related