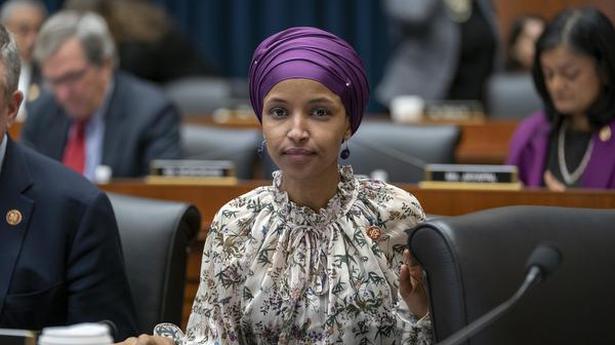 Representative Ilhan Omar said she has faced increased death threats since President Donald Trump spread around a video that purported to show her being dismissive of the 2001 terrorist attacks. “This is endangering lives,” she said, accusing Mr. Trump of fomenting right-wing extremism. “It has to stop.”

Mr. Trump further escalated the stand-off on Monday morning, tweeting that, “Before Nancy [Pelosi], who has lost all control of Congress and is getting nothing done, decides to defend her leader, Rep. Omar, she should look at the anti-Semitic, anti-Israel and ungrateful U.S. HATE statements Omar has made”. “She is out of control, except for her control of Nancy!” Mr. Trump added. Ms. Pelosi was among Democrats who had criticised Trump over the tweet, with some accusing him of trying to incite violence against the Muslim lawmaker. An upstate New York man recently was charged with making death threats against her.

White House Press Secretary Sarah Sanders defended Mr. Trump earlier on Sunday, saying the President has a duty to highlight Ms. Omar’s history of making comments that others deem anti-Semitic or otherwise offensive and that he wished no “ill will” upon the first-term lawmaker.

‘Crimes on the rise’

But Ms. Omar said that since Mr. Trump retweeted the video Friday night, she has received many threats on her life that referred or replied to the posted video. “Violent crimes and other acts of hate by right-wing extremists and white nationalists are on the rise in this country and around the world,” she said. “We can no longer ignore that they are being encouraged by the occupant of the highest office in the land.” She said: “We are all Americans.”

Earlier, Ms. Pelosi issued a statement while travelling in London saying she had spoken with congressional authorities “to ensure that Capitol Police are conducting a security assessment to safeguard Congresswoman Omar, her family and her staff.” Ms. Pelosi said officials will continue to monitor and assess threats against Ms. Omar and called on Mr. Trump to discourage such behaviour. “The President’s words weigh a ton, and his hateful and inflammatory rhetoric creates real danger,” Ms. Pelosi said. “President Trump must take down his disrespectful and dangerous video.”

Neither Trump’s tweet nor the video included Omar’s full quote or the context of her comments, which were about Muslims feeling that their civil liberties had eroded after the attacks.

The force posture review is being done at the direction of President Donald Trump, the U.S. Secretary of State said. Source: thehindu.com Related

Watch | Nobel Prize in Chemistry 2019: For creating a rechargeable world

x more-in A video of Nobel Prize in Chemistry 2019 – For creating a rechargeable world: The Nobel Prize in Chemistry 2019 was awarded jointly to John B. Goodenough, M. Stanley Whittingham and Akira Yoshino for the development of lithium-ion batteries. Support quality journalism – Subscribe to The Hindu Digital SUBSCRIBE TO OUR DAILY NEWSLETTER […]

The main hope is, as always, to try to have an impact on the level of awareness and public opinion so that people will start becoming more aware, she says Source: thehindu.com Related