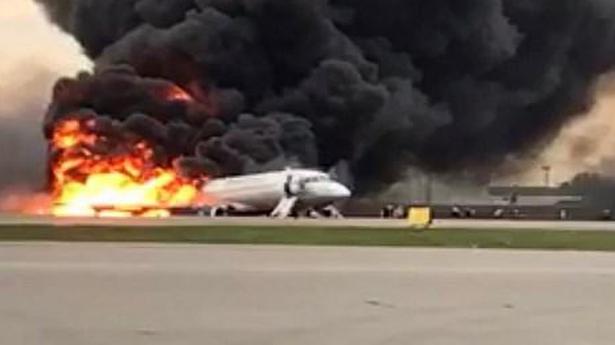 One person was killed and at least five were injured when a Russian Aeroflot Sukhoi Superjet plane made an emergency landing at Moscow’s Sheremetyevo airport on Sunday due to fire on board, Russian news agencies said.

TASS news agency, citing a source, said at least one person was killed. Agencies reported various figures on the number of injured – from five to more than 10. RIA agency said that there were 78 passengers on the plane, which had been headed from Moscow to the northern Russian city of Murmansk. Interfax news agency reported that the tail was completely burned and said a rescue team was trying to find survivors in that part of the plane.

The plane, a one-year-old Sukhoi Superjet, departed from Sheremetyevo for Murmansk but shortly after taking off requested an emergency landing due to fire, according to Russian state media. The plane had registration number RA-89098. Flightradar24 tracking service showed that it made two circles around Moscow and landed after about 45 minutes.

TV footage showed a plane landing with its tail ablaze. On the ground, black smoke billowed from the plane.

U.S. working with Pak. to find way out of Afghan war: Trump

President Donald Trump voiced optimism on Monday that Pakistani Prime Minister Imran Khan could help broker a political settlement to end the nearly 18-year-old U.S. war in Afghanistan and held out the possibility of restoring aid to Islamabad. “I think Pakistan is going to help us out to extricate ourselves,” Mr. Trump said, with Mr. […]

Indian-American techie walks into California police station with dead body in car, leads police to 3 others

A 53-year-old Indian-origin IT professional has been arrested after he dramatically walked into a Northern California police station along with a dead body in his car and confessed to have killed three others at his apartment, over 350 km away, according to U.S. media reports. All four victims in the incident are related to the […]

Vowing to take up what he called his “worries” about “Hindu supremacy” in India and the situation in Kashmir post-revocation of Article 370 with leaders at the United Nations General Assembly, including U.S. President Donald Trump, Pakistan’s Prime Minister Imran Khan said here that he wanted a “reset in ties” with India, but had been […]