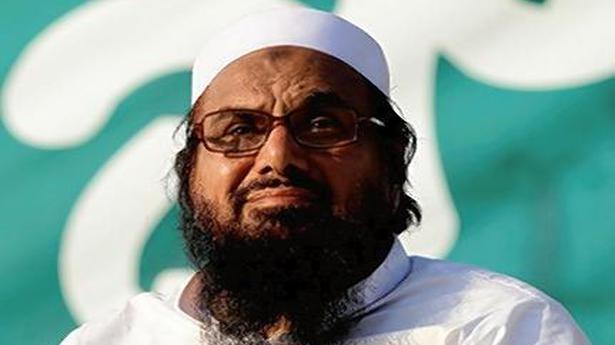 Mumbai terror attack mastermind and JuD chief Hafiz Saeed and his three aides were granted pre-arrest bail on Monday by an anti-terrorism court in Pakistan in a case pertaining to the banned outfit’s illegal use of land for its seminary.

The Anti-Terrorism Court (ATC) in Lahore granted interim bail to Saeed and his aides — Hafiz Masood, Ameer Hamza, and Malik Zafar — until August 31 against surety bonds of ₹50,000 each, Dawn newspaper reported.

During the hearing, Saeed’s counsel insisted that Jamat-ud Dawah (JuD) was not using any piece of land illegally and urged the court to accept bail pleas.

According to officials, JuD’s network includes 300 seminaries and schools, hospitals, a publishing house and ambulance service.

In March, Punjab police said that government seized control of 160 seminaries, 32 schools, two colleges, four hospitals, 178 ambulances and 153 dispensaries associated with the JuD and its charity wing the Falah-e-Insaniat Foundation (FIF) in province.

At least 56 seminaries and facilities being run by the JuD and FIF in southern Sindh province were also taken over by authorities in the same month.

Saeed-led JuD is believed to be the front organisation for the Lashkar-e-Taiba, which was responsible for carrying out the 2008 Mumbai attacks.

The U.S. Department of the Treasury has designated Saeed as a Specially Designated Global Terrorist, and the U.S., since 2012, has offered a $10 million reward for information that brings Saeed to justice.

Under pressure from the international community, Pakistani authorities have launched investigations into matters of the JuD, LeT and the FIF regarding their holding and use of trusts to raise funds for terrorism financing.

Meanwhile, the Lahore High Court (LHC) issued notices to the federal government, the Punjab government and the Counter-Terrorism Department (CTD) regarding a petition filed by Saeed and his seven aides, challenging charges of terror financing and money laundering against them. A two-member bench of the LHC comprising Justice Shehram Sarwar Chaudhry and Justice Mohammad Waheed Khan asked the parties to submit their replies within two weeks.

A lawyer for the federal government objected to the notices, arguing that the petition was non-maintainable. The bench, however, dismissed the objection and adjourned proceedings until July 30, the paper said.

The Counter Terrorism Department (CTD) of Punjab Police on July 3 registered 23 FIRs against 13 leaders of the JuD including Saeed on the charges of “terror financing” in different cities of Punjab province.

On Friday, Saeed, who is reportedly living at his Jauhar Town residence in Lahore, challenged these FIRs in the Lahore High Court.

“Hafiz Saeed and other (petitioners) are not members of Lashkar-e-Taiba (LeT) as per the (earlier) judgement of the LHC. The petitioners have no nexus with LeT or Al-Qaeda,” the petition said.

It urged the LHC to declare that the petitioners are not linked with the LeT and therefore the CTD’s FIRs be declared illegal.

Social media giants Facebook, Twitter, Google faced scrutiny over extremist content on their platforms on Friday after video footage of mass shootings in New Zealand was live streamed and widely shared online. Footage of the attacks was broadcast live to Facebook and then re-shared by users on other platforms. Following the shootings, Facebook, Twitter and […]

In a suspected hate crime, a Hindu medical student was found dead in Pakistan’s Larkana city. Namrita Chandani, a final year student of Bibi Asifa Dental College in Larkana, was found dead in her hostel room on Monday. Chandani, who belonged to Mirpur Mathelo, a taluka of Ghotki, was found lying on a charpai with […]