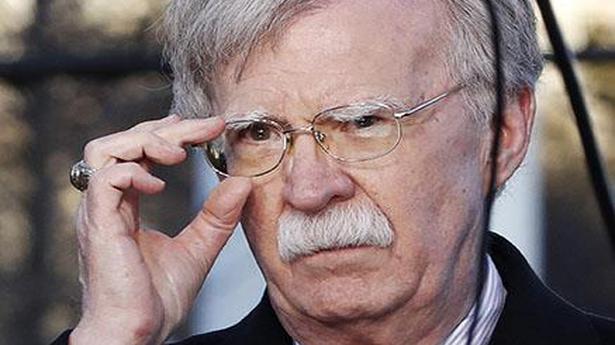 Pakistan has assured the U.S. that it would deal “firmly” with all terrorists operating from the country, and take steps to de-escalate tensions with India, according to National Security Advisor John Bolton.

The assurance was given by Pakistan Foreign Minister Shah Mehmood Qureshi during a phone call on Monday, Mr. Bolton said on a day when Foreign Secretary Vijay Gokhale called on U.S. Secretary of State Mike Pompeo here and discussed the need to bringing those responsible for the Pulwama attack to justice and the urgency of Pakistan taking meaningful action against terrorist groups operating on its soil.

“Spoke with Pakistani FM Qureshi to encourage meaningful steps against JeM and other terrorist groups operating from Pakistan,” Mr. Bolton said in a tweet.

“The FM assured me that Pakistan would deal firmly with all terrorists and will continue steps to de-escalate tensions with India,” he said.

Tensions flared up between India and Pakistan after a suicide bomber of Pakistan-based Jaish- e-Muhammed (JeM) killed 40 CRPF personnel in Kashmir’s Pulwama district on February 14.

Mr. Qureshi said that Pakistan Prime Minister Imran Khan decided to hand over the Indian Air Force pilot as a gesture of goodwill towards India.

Pakistan wished peace and stability in the region, he was quoted as telling the U.S. National Security Advisor.

The Foreign Minister also informed Mr. Bolton that Pakistan’s High Commissioner to India had returned to Delhi after consultations.

Guaidó says his Chief of Staff has been detained

Venezuelan Opposition leader Juan Guaidó said on Thursday that intelligence agents had detained his Chief of Staff following a pre-dawn raid, signalling that President Nicolás Maduro may be cracking down on the Opposition’s challenge to his rule. U.S. Secretary of State Mike Pompeo, in a post on Twitter on Thursday, called for Roberto Marrero’s immediate […]

A group of 33 Sri Lankan students returned to the country from Wuhan Province in China, after a chartered Sri Lankan Airline flight flew them back Saturday morning. “Due to great diplomatic relations between #LKA & #China we were successful in evacuating our citizens in #Wuhan, under lockdown,” President Gotabaya Rajapaksa said in a tweet […]

The top official in Wuhan, the epicentre of the coronavirus epidemic in China, warned residents to stay vigilant and avoid going out, even as the latest data showed a decline in new cases in the mainland and zero new infections in the city. The country where the virus emerged late last year will hold three […]