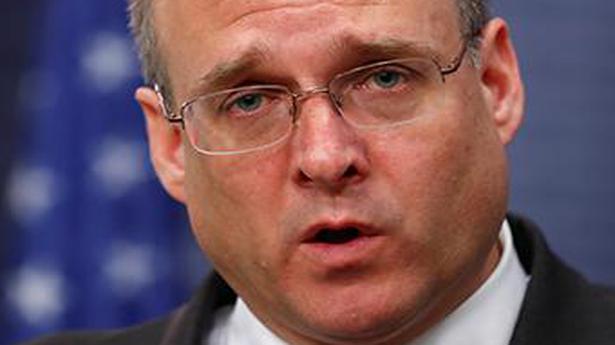 There is “absolutely a possibility” that Pakistan could be on its blacklist after the international financial watchdog’s next meeting in October in Paris, the outgoing president of the Financial Action Task Force (FATF), Marshall Billingslea, said on Friday. The comments were made at a press briefing at the end of the FATF plenary held in Orlando, Florida, an audio call of which was released to the press on Monday morning.

Pakistan had “significant” work to do and was, with regard to an action plan agreed in June 2018, “lacking in almost every respect”, Mr. Billingslea said.

“Pakistan was cautioned in February at the plenary that they had missed almost all of their January milestones. And they were urged to not fail to meet the milestones in May. Unfortunately, Pakistan has yet again missed its May milestones,” he added.

“There is much that must be done by September. If they fail to implement the action plan by September then the FATF has made clear that we will consider next steps.”

China, Turkey, Malaysia, Indonesia, Saudi Arabia and the Gulf Cooperation Council were among those at the Orlando plenary who had asked that Pakistan be given more time to comply with the action plan, The Hindu had reported over the weekend.

Getting on the FATF blacklist, which currently only has Iran and North Korea on it, could severely cripple and isolate a country financially, resulting in a downgraded credit rating and denying it loans and development assistance.

Mr. Billingslea said he did not want to specify or prejudge outcomes and that this was his last plenary as President of the FATF, but reiterated that Pakistan had much work to do if it was going to meet the action plan requirements.

In response to a question on whether Pakistan’s Central bank had enough regulatory measures in place and concerns about the grey economy in the country, Mr. Billinglsea said that Pakistan did not adequately appreciate the transnational terror financing risks.

“… Pakistan does not either appreciate or chooses not to acknowledge the transnational, trans-border terrorist financing risk they face. Even though they did issue an addendum, an annex, to their national risk assessment following the February discussion. There are also a number of other structural and legal changes that have to be undertaken, including successful prosecution of terrorist financing cases,” he said.

India had been pushing for Pakistan to get on the FATF blacklist for its failure to take “credible, verifiable, irreversible and sustainable measures” against terrorist activities.

Mr. Billinglsea said, in response to a question on Pakistan having the capacity to meet its milestones, that if they did not currently have the capacity, they are expected to generate it, and soon, in order to meet their targets.

He said that any conditionality associated with Pakistan’s loan from the International Monetary Fund (IMF) would not automatically have a connection to the FATF outcomes, although the IMF could choose to link the two. The U.S. has been pushing for a conditionality on an approximately $6 billion IMF loan to Pakistan, agreed in May.

“So the IMF is an observer organisation to the Financial Action Task Force and so they have complete visibility into everything that occurs within the task force, including a very detailed understanding of what the Pakistani action plan is. The decision however, to condition fund disbursement under an IMF programme based on structural benchmarks that might be associated with the Financial Action Task Force is purely an IMF decision,” he said.

A Bill demanding that Prime Minister Boris Johnson delay Britain’s withdrawal from the European Union on October 31 if he cannot get a divorce deal became law on Monday but his office insisted that Brexit would happen by that date, “no ifs and buts”. Parliament was also likely to reject Mr. Johnson’s call on Monday […]

At least 48 people have been killed in Mozambique and 39 in neighbouring Zimbabwe after tropical cyclone Idai tore through the two southern African countries, officials and media said on Sunday. Dozens of others are missing after the storm brought strong winds, heavy rains and flash flooding. Mozambique’s state-owned Jornal Domingo newspaper reported 48 people […]