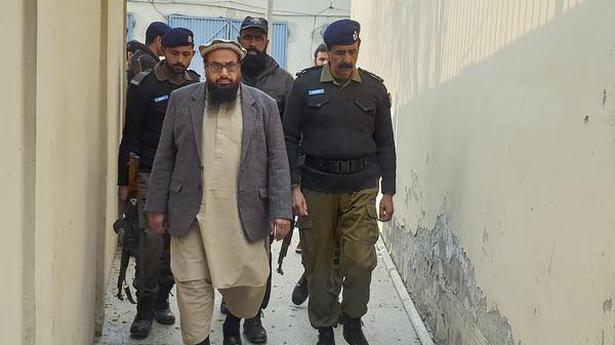 Mujahid was last month sentenced to 32 years in jail by the anti-terrorism court in two terror financing cases.

Earlier, the ATC Lahore had sentenced Iqbal for 26 years imprisonment in three such cases.

ATC Judge Ijaz Ahmad Buttar announced the verdict in FIR 42 of 2019 under different provisions of the Anti-Terrorism Act 1997.

The three convicts were present in the court when the judge announced the verdict.

The Counter Terrorism Department (CTD) of Punjab police had registered as many as 41 FIRs against JuD leaders, including Saeed in different cities. The trial courts have so far decided 25 cases.

The ATC has sentenced Saeed for a collective imprisonment of 21 years on terror financing charges under sections 11-N of Anti-Terrorism Act 1997 in four cases so far.

Saeed-led JuD is the front organisation for the Lashkar-e-Taiba which is responsible for carrying out the 2008 Mumbai attack that killed 166 people, including six Americans.

The U.S. named Saeed as a Specially Designated Global Terrorist, and the country, since 2012, has offered a $10 million bounty on Saeed.

The restrictions on demonstrations are subject to approval by the Knesset, Israel’s parliament, and the limits on both prayers and protests could spark a backlash. Source: thehindu.com Related

Donald Trump issued a disaster declaration on Sunday for Louisiana. He had previously issued a similar declaration for Puerto Rico. Source: thehindu.com Related

Saudi Arabia said Wednesday it joined a U.S.-led coalition to secure the Mideast’s waterways amid threats from Iran after an attack targeting its crucial oil industry. The kingdom’s decision to enter the International Maritime Security Construct came ahead of a planned visit by U.S. Secretary of State Mike Pompeo. Saudi officials separately planned to share […]