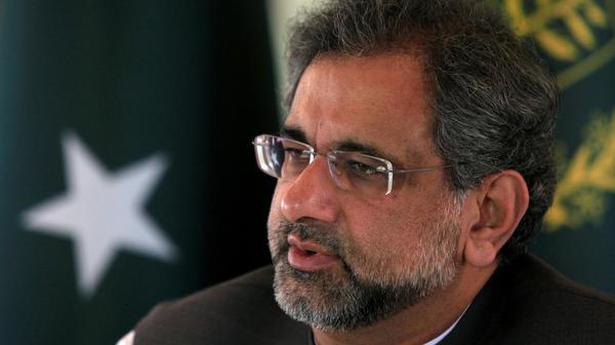 A National Accountability Bureau team intercepted Mr. Abbasi’s car at Thokar Niaz Baig in Lahore and arrested him. He initially resisted the arrest but eventually conceded.

Mr. Abbasi, who served as the Prime Minister from August 2017 to May 2018, had come to Lahore from Islamabad to hold a press conference but he was arrested before reaching the venue of the event.

The NAB was probing alleged corruption in the award of contract to import LNG from Qatar by Mr. Abbasi when he was Minister for petroleum and natural resources in the Cabinet of former Prime Minister Nawaz Sharif.

Mr. Abbasi has denied the charges and said that he would prove his innocence in any court of law.

He would be presented before a NAB court to get remand for further investigation.

Earlier, the NAB had summoned him on July 18 in the case but he skipped the appearance.

Prime Minister Imran Khan is in Lahore and the Opposition Pakistan Muslim League-Nawaz (PML-N) alleged that Mr. Abbasi has been arrested on his direct order. “We strongly condemn this arrest as Imran Khan Niazi wants to put all opposition leaders in jail,” PML-N president Shahbaz Sharif said. He said there has been unholy alliance between Imran Khan and the NAB. “This is a shameful victimization of opposition leaders by Niazi. Opposition cannot be intimidated through such fascist actions,” he said.

Indian-American to run for Congress

Indian-American entrepreneur and philanthropist Krishna Bansal will run for the US House of Representatives. Mr. Bansal, who will enter the race from 11th Congressional District of Illinois from the Republican Party, launched his campaign over the weekend, which among others was attended by more than 20 elected officials, eminent Indian-American leaders and community members of […]

Syria’s Kurds battled to hold off a Turkish invasion on Thursday as thousands of civilians fled air strikes and shelling that deepened fears of a humanitarian crisis. U.S. President Donald Trump tried to justify the de facto green light he gave his Turkish counterpart Recep Tayyip Erdogan for an assault seen as a blatant betrayal […]

However, he did not comment on the inevitable speculation that the cyberattacks were part of Australia’s increasingly hostile rift with China Source: thehindu.com Related