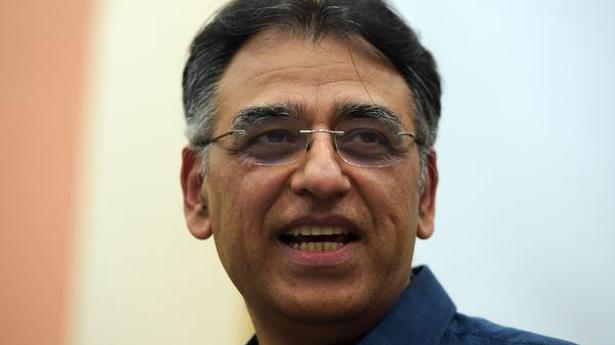 Pakistan’s Finance Minister Asad Umar stepped down on Thursday as part of a reshuffle of the Cabinet initiated by Prime Minister Imran Khan.

“As part of a Cabinet reshuffle, PM desired that I take the Energy Minister portfolio instead of Finance. However, I have obtained his consent to not take any Cabinet position. I strongly believe @ImranKhanPTI is the best hope for Pakistan and inshallah will make a naya Pakistan,” Mr. Umar tweeted on Thursday.

Abdul Hafeez Sheikh will be Adviser on Finance.

Sources said Petroleum Minister Ghulam Sarwar Khan was also asked to step down, but he refused to do so. He reportedly said that he will leave Prime Minister Khan’s Pakistan Tehreek-e-Insaf (PTI) party if he’s forced to quit the Cabinet. He has now been made Federal Minister for Aviation.

Earlier, when media reported that a reshuffle was in the offing, the government had issued a denial.

Senior journalist Kashif Abbasi — who worked on this story for weeks and confirmed from various sources before breaking it — told this writer that the denial was given because the government was still mulling over replacements.

“Since one of them was the Finance Minister, any premature news on his departure would have affected the economy.”

Pakistan’s economy is going through a tough phase. Former Finance Minister Miftah Ismail told this writer that it is not enough to change a Minister or two. “The real problem is the direction set by the PM.”

Anchor Shahzad Iqbal said some Ministries were under-performing. The Finance Ministry, for example, had failed to reform the Federal Board of Revenue and achieve the tax target. “Bringing the economy on track was one of the biggest challenges for this government. The expectations were high but so far, they have not been fulfilled,” he said. Mr. Iqbal added that eight months were not enough to judge any Finance Minister’s performance, especially when a weak economy was handed over to him. “Asad Umar should have been given more time.”

Senior anchor Mansoor Ali Khan said Prime Minister Khan has created a hard shell around himself and has stopped caring about what the Opposition will say. “Khan took resignations from his Ministers when they landed in trouble.”

Mr. Mansoor Ali Khan said it is needed because this is Mr. Khan’s first time in federal government.

“This is a coalition government with an inexperienced Cabinet. I hope that with the passage of time, the captain and his Cabinet will learn their lessons through trial and error.”

Three Taliban commanders who are part of a prisoner swap for two Western hostages held by the militant group have landed in Qatar, three Taliban sources familiar with the deal said on Tuesday. The Afghan government’s decision to carry out the swap is seen as key to securing direct talks with the Islamist militants, who […]

A mysterious toxic gas has killed at least 14 people and sickened several others in Pakistan’s southern port city of Karachi, police said on Tuesday. Authorities were alerted to the incident when the residents of Karachi’s Keamari area began rushing to nearby hospitals with severe breathing problems on Sunday night. The source of a toxic […]

The World Bank on Thursday approved $1 billion emergency financing for India to tackle the coronavirus outbreak, which has claimed 76 lives and infected 2,500 others in the country. The World Bank’s first set of aid projects, amounting to $1.9 billion, will assist 25 countries, and new operations are moving forward in over 40 nations […]