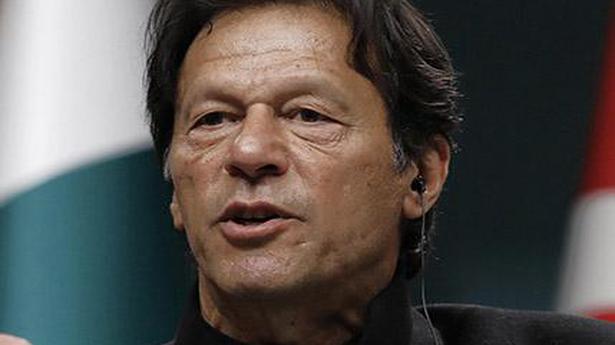 “I congratulate Prime Minister Modi on the electoral victory of BJP and allies. Look forward to working with him for peace, progress and prosperity in South Asia,” Mr. Khan tweeted.

The Pakistan Prime Minister had in April told a group of foreign journalists that “if the BJP wins, some kind of settlement in Kashmir could be reached.”

Federal Minister for Education Shafqat Mahmood said Mr. Khan’s Pakistan Tehreek-e-Insaf (PTI) government firmly believes that the real wars that India and Pakistan need to fight are against poverty and illiteracy. “I hope that after this victory, Mr. Modi will play a positive role towards peace between our two countries. For peace to happen the sufferings of the Kashmiri people have to end,” he said.

While Mr. Khan and his party stalwarts think a Modi win means peace has a chance, others are not as hopeful.

Sherry Rehman, parliamentary leader of the Pakistan Peoples Party (PPP) in the Senate, said the exit polls had foretold a BJP landslide. “The final count means a tougher neighbourhood for Pakistan.”

Ms. Rehman said that ideally, a more confident Mr. Modi should mean sustainable talks are a possibility. “Yet, the BJP’s mandate, among other things is extremism and exclusion. Islamabad has a sweet tooth for Modi’s mithai (sweet) but translating niceties into a serious peace process is unlikely unless there is a revision in the strategic priorities of the Modi government, in which political and constitutional repressions are reversed in Kashmir.”

Senior journalist Nasim Zehra said it needs to be seen whether “Mr. Modi’s India will continue its aggressive militarised policy towards Pakistan, or will a wiser Mr. Modi, in the Vajpayee mode, commit himself to regional peace and prosperity, and re-engage with Pakistan.”

These are questions on other minds also. Senior journalist Najam Sethi said Mr. Khan thinks Mr. Modi will make peace with Pakistan. “I think Modi will continue on the same path that has yielded dividends.”

Moeed Yusuf, associate vice-president at the United States Institute of Peace, said he worries about the future of the relationship between the two countries. “Prime Minister Modi went out on a limb to bash Pakistan during his campaign. It won’t be easy for him to change tact on this. That said, his landslide victory may give him the confidence to take a few risks and I can only hope that he sees the importance of improving ties with Pakistan. But everyone will have to be patient. Nothing is going to improve quickly.”

Pakistan owes $10 billion debt to China for Gwadar port, other projects: US general

Pakistan owes its “all weather friend” China at least USD 10 billion debt for the construction of the Gwadar port and other projects, the top US general has said, as he underlined Beijing’s “predatory economics” to expand its global influence. The strategic Gwadar Port in Balochistan province on the Arabian Sea is being built by […]