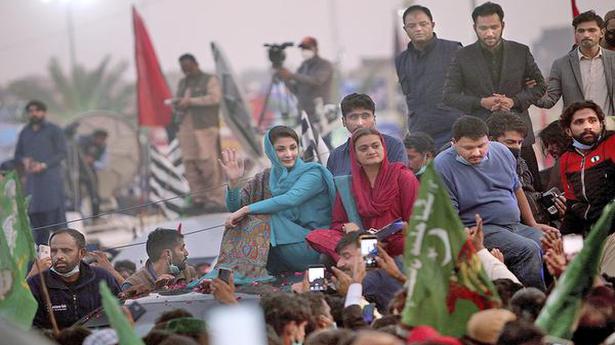 Despite a government ban and arrests of hundreds of activists, Pakistani Opposition supporters rallied in a central city on Monday, calling on Prime Minister Imran Khan to resign over alleged bad governance and incompetence.

The rally in Multan by the Pakistan Democratic Movement, an alliance of Opposition parties, was held a day after the police, on orders from the government, carried out the arrests and banned the gathering, defending the move as necessary to combat the coronavirus pandemic.

The police acknowledged arresting more than 370 people, while Opposition groups put the number at more than 1,800. Authorities also switched off the mobile phone network.

Maryam Nawaz, the daughter of former Prime Minister Nawaz Sharif, attended the rally. “There is no doubt that this government will no more be in power in the coming days, God willing, and I have no doubt about it,” she said.

Also in attendance and marking her political debut was Assefa Bhutto Zardari, the daughter of former Prime Minister Benazir Bhutto, who was assassinated in 2007.

Foreign Secretary Vijay Gokhale to have ‘bilateral consultations’ in Beijing

Foreign Secretary Vijay Gokhale will arrive in Beijing on Sunday for “bilateral consultations”, amid signs that China may review its position on lifting its “technical hold” on listing the founder of terror outfit Jaish-e-Mohammad (JeM), Masood Azhar, as an international terrorist. Mr. Gokhale is arriving ahead of the Belt and Road Forum (BRF) – a […]

Foreign Ministry spokesman Zhao Lijian said that China was acting to protect its national interest, but did not spell out what form the sanctions would take Source: thehindu.com Related

David Beasley urged donors, including governments and institutions, to help, and he made a special appeal to the more than 2,000 billionaires in the world to open their bank accounts Source: thehindu.com Related